American Michael Thorbjornsen has taken out the Western Amateur defeating Gordon Sargent 4&3 at the Glen View Club near Chicago.

Thorbjornsen began the Western Amateur week with a course record 8-under 62 before taking down an impressive list of opponents to win arguably one of the world’s most prestigious amateur titles. 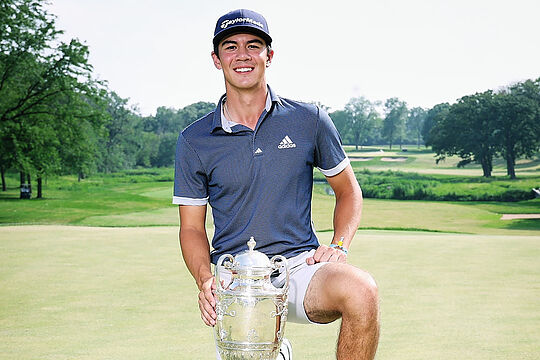 After firing rounds of 68-62-70-67 to finish at 13-under and one ahead of David Ford and Pierceson Coody, Thorbjornsen faced the recent Southern Amateur champion, Maxwell Moldovan, a sophomore at Ohio State.

Thorbjornsen accounted for him, 2&1, before facing two-time Western Amateur semi-finalist Ricky Castillo in the quarter-finals. A 2-up victory over Castillo and a win over Austin Greaser set up his finals appearance.

Thorbjornsen had the advantage for much of the championship match, but Sargent birdied the 9th and 10th to cut the deficit. Thorbjornsen then won three holes in a row from 11-13 to set the stage for a 4&3 victory. Both earn exemptions into the 2022 Evans Scholars Invitational on the Korn Ferry Tour.

The Western Amateur title adds to Thorbjornsen’s win in the 2018 US Junior. He joins a prestigious list of Western Amateur champions including Tiger Woods, Jack Nicklaus and Phil Mickelson.

Karl Vilips finished the best of the Australians making it into the top-16 in match play before losing to Pierceson Cody 2&1 in the opening match play round.

Jed Morgan, Louis Dobbelaar, Andre Lautee, Jack Trent, Connor McKinney, and Lachlan Barker all failed to make it past the second round cut in stroke play.