Three-way tie as players battle the elements at MOTA

The second round of the Australian Master of the Amateurs had the leaderboard change multiple times as strong southerly winds lashed the West Course at The Royal Melbourne Golf Club.

The men’s championship sees a three way tie with Justin Warren (pictured) firing a 1-under-71 to move six places up the leaderboard to be at 4-under-par total along with American Matthew Wolff and first round leader Japan’s Keita Nakajima, who fired rounds of 73-74 consecutively.

Warren was out early to post his score, yet conditions remained challenging all day.

“It was certainly wasn’t easy out there,” said Warren.

“I started with a bogey and ended with another. Three birdies helped my score and overall I’m pleased with the way I played given how hard the greens were. It’s great to be in a position to be leading after two rounds and hopefully I can keep it going over the second half of this tournament.” 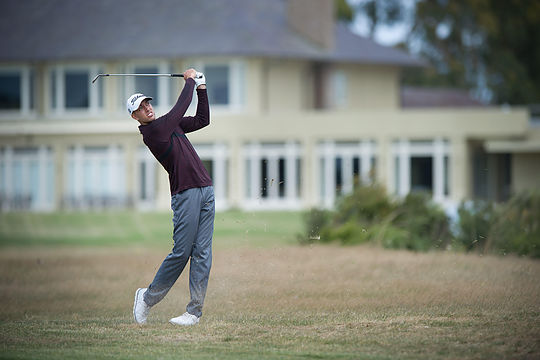 A highlight of the second round was Canada’s Joey Savoie’s albatross on the 455 metre par 5 15th. Savoie combining a 3 wood off the tee and nailing his seven iron shot to the hole.

In the women’s championship overnight leader Beck Kay holds a one stroke lead to be at even par, with fellow Australian’s Grace Kim, Julienne Soo and Stephanie Kyriacou in a share of second position at 1-over-par.

Kay’s round of 75 was a mixed bag of eagles, birdies and bogies but it was enough to ensure she tees off with the final pairings tomorrow.

“I’m a little surprised to be still in the lead given my score today,” said Kay.

“Tomorrow is another round and just to get in and still be in contention is a real relief. I played ok out there today, just that it was not easy out there and a few costly mistakes really punished my score.”

Kim and Soo in contrast had earlier tee times with Kim carding opening rounds of 72-73 and Soo recording 71-74 to be at 1-over-par.

Stephanie Kyriacou played brilliantly in the afternoon taking the lead to be at 1-under with three to play before the 164 metre par 3 16th on Royal Melbourne’s West Course bit hard resulting in a double bogey.

Kyriacou then came in with bogies on the 17th and 18th to move back to 1-over-par in total. The four dropped shots was a devastating blow, yet Kyriacou was still up beat with being in contention heading into the final two rounds.

“It wasn’t the end I wanted but I played well overall,” said Kyriacou.

The day’s low round in the men’s championship went to Australia’s Josh Armstrong who jumped 56 places with his round of 7-under-par 65 to be currently in a share of 16th position.

Maddison Hinson-Tolchard fired the best second round in the women’s championship with a 2-under-par 70.