Matt Stieger, Heath Riches and Dimi Papadatos share the third round lead at even par at the Golf SA Amateur Classic at Glenelg Golf Club.

Stieger, the 2011 Australian Amateur champion, fired the day’s 4-under-par 67 low round to move up the leaderboard after opening with rounds of 74-74. 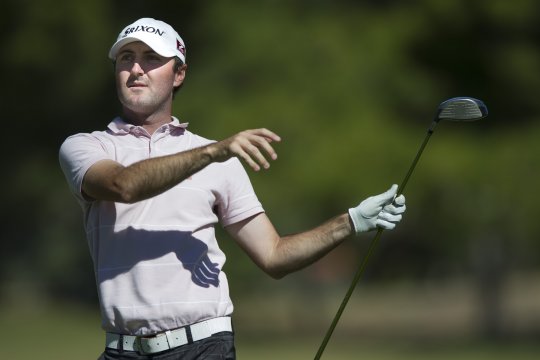 Heath Riches is in a tie for the lead at even-par along with Matthew Stieger and Dimi Papadatos after the third round of the Golf SA Amateur Classic (Photo: Anthony Powter)

“It was tough out there,” said Stieger, who was one of only three players in the field of 60 to better par in the third round.

“The greens are exceptionally challenging and today I managed to get the putter working and hole putts when I needed to.”

Stieger is not a stranger to being in the box set leading into the final round of an amateur tournament.

“Patience will be the key tomorrow,” says Stieger.

“You cannot short side yourself on the greens. In the opening rounds I was under reading the greens and missing some easy putts. It won’t be easy out there tomorrow and hopefully I can continue to make the putts.”

With twelve players within four strokes of the leaders, the Golf SA Amateur Classic remains up for grabs.

Papadatos has held the lead at these championships since opening with 67 on Thursday, to follow on with a second round 73.

Another 1-over-par 73 today by Papadatos reflective of how challenging the superb Glenelg layout is presenting. No player is currently with a combined under-par score.

Nathan Holman, winner of the Master of the Amateurs, was another to make his move firing an impressive 3-under-par 68 to move into a tie for fourth position with Matthew Overall and Callan O’Rielly.

Holman recorded an uncharacteristic six over par 77 in Thursday’s opening round but has fired back with rounds of 70-68 to get back into the tournament.

“Overall, I’m pleased with where I am,” said Holman.

“I have managed to bounce back and be in contention, which is great. This is a tough course and you know Matt [Stieger] or one of the others will probably score par or less tomorrow. If I can shot a 68 or 67, I’ll be in with a chance.”

Defending champion Brett Drewitt is within the mix of players who are only four strokes from the leaders, along with Ryan McCarthy, Rory Bourke and Ben Clementson.

“I came in slowly today with bogeys on the last three holes, yet felt that I was playing well. I’ll need to shot low tomorrow and hopefully the wind will pick up and that will give me a chance.”

The stage is set for a close finish at this Golf SA Amateur Classic.

Stieger is certainly looking the part, as is Heath Riches who continues to play stellar golf. Papadatos also is looking composed as he searches for his maiden National Trial title.

Glenelg is a layout where nothing can be taken for granted and with its tough closing holes is sure to throw out the challenge.

The greens are superb and rolling well, yet reaching the putting surface in regulation is no guarantee of par. The pins have been in treacherous locations, causing frustrations and disbelief for many in the field.

It will be the player who is able to control his flat stick that will win this event, along with the ability to handle the final day nerves.

Experience will play a pivotal factor and you cannot go past Stieger, Holman, Bourke, Drewitt and McCarthy in this department, as they are sure to be in the mix come the closing stages of tomorrow’s round.