Thrills and spills at the Australian Open

Round one at The Emirates Australian Open almost had it all – the sun being perhaps the only missing ingredient.

A day that threw flukey winds and rain at participants from the early hours still wasn’t enough to stop a slew of sub-par scores in the morning and afternoon fields, highlighted by Jordan Spieth’s four-under 67 in the afternoon in the company of Adam Scott and Nick Cullen. Scott Gardiner holed out on the 2nd for what he estimated was the ninth hole-in-one of his career, albeit this ‘was the best one of them all’ worth a $70,000 Lexus. 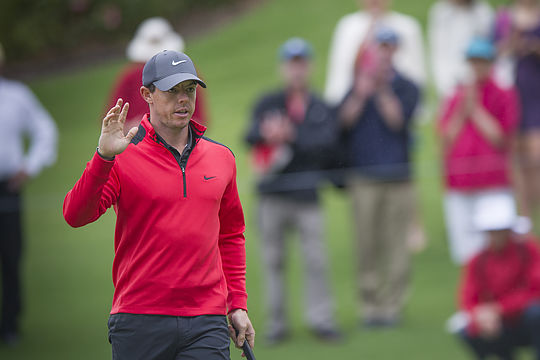 Rory McIlroy waves to the crowd during round one of the Australian Open (Credit: Anthony Powter)

The hole-in-one got him back to level par after two holes, having doubled the first, which is a fate that also befell Scott. Ironically, world number one Rory McIlroy tapped in for a birdie on the 9th hole, his final for the day, as Scott was addressing his opening tee shot on the nearby 1st hole.

Scott didn’t stop his pre-shot routine despite the roar for McIlroy’s birdie, but one wonders if he should have regrouped as he blocked his tee shot way right.

The ups and downs around the Nicklaus redesign of The Australian Golf Club were intriguing to watch in this weather. The front pin location on the short 3rd gave some high profile players fits.

Playing with McIlroy, Geoff Ogilvy came to the 3rd (his 12th for the day) several strokes to the better of par but spun a lob wedge back down the slope into the water en route to a double bogey.

Fresh from his recent Turkish Open high finish and a spot in last week’s Dubai World Tour Championship, Wade Ormsby made the same mistake not long after.

Ogilvy also bogied the par-three 4th but was ‘stiffed’ after hitting a brilliant tee shot into the wind that pitched pin high but just fell into a poorly raked back bunker, leaving him with virtually no chance of an up and down.

Another double bogey at the 9th(his final hole) saw Ogilvy in with a 74, the same score as Scott.

Brett Rumford auditioned for the shot of the tournament, possibly the Australian summer, with a truly miraculous par on the 4th. Rumford pulled his tee shot way left, hit the cart path and was left with a pitch back to the green from the rough in front of the 5th tee.

Compounding the difficulty was that the shot was from a downhill lie, over gum trees with the pin tucked back left near the rear bunker.

Rumford’s flop shot was pitched inch perfectly on the wet fringe, somehow checking and rolling to within four feet to the astonished acclaim of the gallery. If he goes on to feature in this championship, he’ll no doubt look back on this par save as a key moment because any kind of score was possible.

From relatively straightforward positions around the green, playing partners Greg Chalmers and Jarrod Lyle failed to save par and no doubt walked off the green in shock at being trumped on the hole.

Holes-in-one, eagles, birdies, double bogies, interesting short shot options from around these new green complexes…..with some sun expected for the rest of the week, there’s plenty more of the same to come.