Tiger’s ‘Better Than Most’ putt turns 20

And it was NBC commentator Gary Koch, who was there on the day to make what is now the legendary “better than most” call as Woods’ ball found the bottom of the hole.

“Every single one of them had putted the ball off the green,” said Koch.

“It comes down that slope; they don’t read enough break. It breaks to the right and the ball ends up in the fringe.”

However, Tiger had different plans.

In early 2001, he already had 25 PGA Tour titles under his belt including five majors and had won the Bay Hill Invitational the week prior.

Following rounds of 72 and 69, he entered Saturday six shots behind Jerry Kelly so the World No.1 needed something special if he was to have any chance of pulling off a victory at TPC Sawgrass.

And that something special came in the form of an 18-metre putt at the infamous par-3, 17th hole island hole. 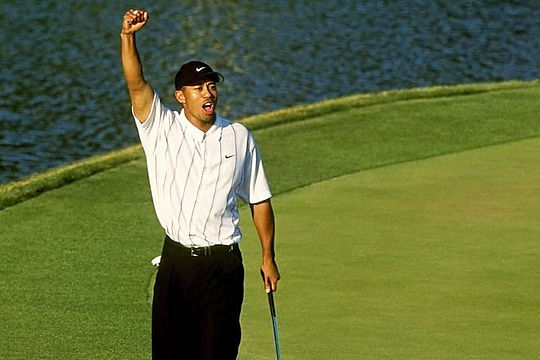 Woods watched from the tee as Fred Funk attempted his putt from the top shelf, which ran past the hole and off the green leaving him with a brutal double-bogey despite landing his tee-shot on the green.

Just to put things in context, according to current ShotLink-era data, putts from over 50-feet (15m) on that same green have just a 2% chance of going in the hole.

The 25-year-old Woods then stepped up and put his tee shot in a similar place to Funk and looked very likely to suffer a similar fate.

However, having seen Funk’s putt, Woods knew he needed a different line.

“I knew how quick it was, so I gave it a little bit more,” said Woods.

“And as soon as it started to break, I’m like, stop breaking. And then it caught the low side of the hole and went in.”

NBC’s Koch was there all the way too.

His first utterance of “Better than most” came as he noticed Woods’ change of line and as the ball tracked closer to the hole, Koch’s voice rose in excitement again along with another “Better than most” as the World No.1 looked like he might pull off the miracle putt.

As the ball fell into the hole, Koch again uttered that famous line – “Better than most.”

Woods went on to secure his second Masters win a couple of weeks later to make it three PGA Tour wins in a row.