Tiger Woods brilliantly ignited memories of the late, great Seve Ballesteros in playing a recovery shot from the side of the green at the 10th hole today in the WGC – Dell Technologies Match-Play in Austin, Texas.

The former three-time event winner was in danger of falling 2-down in his match against fellow American Brandt Snedeker.

But then in a move that serves as a reminder to those who enjoyed watching Ballesteros, Woods got down on both knees and flipped around his right-handed wedge to knock the shot onto the green left-handed.

The 60-foot ‘bush shot’ dutifully came to rest just over a metre from the cup from where he saved par to halve the hole. 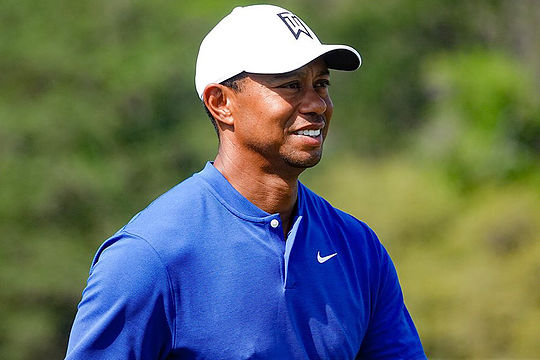 In the end, Woods was beaten 2&1 by Snedeker and now needs to defeat Patrick Cantlay if he is to have any chance of progressing to Saturday morning’s final 16.

In fact on top of his own win, Woods also needs Aaron Wise to beat Snedeker tomorrow to see the 80-time PGA TOUR winner advance.

However, if Snedeker should tie against Wise and Woods win, then a sudden death playoff would come between Woods and Snedeker.

Snedeker was asked after defeating Woods what he thought of his match against the 14-time Major winner.

“I’m probably the most hated man in Texas right now… I bet you my kids were probably rooting for him late in the round,” Snedeker joked.

“In the grand scheme of things it doesn’t really mean that much. I’ve got to go out and win tomorrow. As great as today was and as much fun as I’ve had, I’ve got to kind of reset my goals for tomorrow and make sure I’m doing the same thing I did this morning, which is tough to do.

“You want to look ahead and say, hey, I beat Tiger. (But) I’m not anywhere yet. I’ve got to go play great tomorrow and use this momentum today from a lot of good stuff late in the round and kind of take that out tomorrow.”