It was two years in the making – twenty-six starts worldwide without a win – but Tiger Woods has broken his winless drought with a dramatic one stroke victory over Zach Johnson at the Chevron World Challenge.

The last occasion Woods lifted a tournament trophy was at the 2009 JBWere Masters in Melbourne before his world took an abrupt turn when scandal shattered his iconic image. 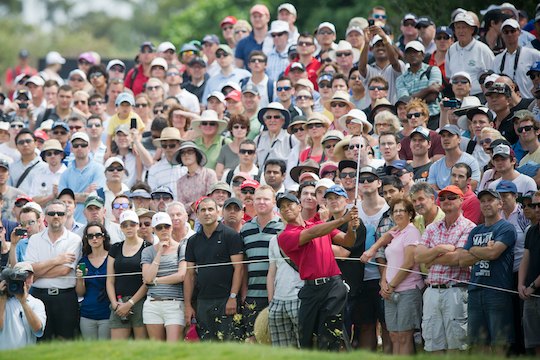 Periods of injury and dealing with personal issues had forced Tiger in to the wilderness with the golf world crying out for his return.

That all changed today in California.

Fans came hoping to see the Chevron World Challenge turn into a milestone, and only a Woods victory would do that.

Woods and Johnson traded shots throughout the final round with Johnson doing his best to deny Woods of victory until the closing stages of the round when Tiger pounced at the 17th.

Two holes later, fans got what they came for with Woods clinching the title through one of his trademark finishes of pure power and determination.

Johnson had earlier holed a 4 metre birdie putt on the par-5 16th to put Woods one down with two holes remaining.

Woods had two holes to make the fans happy, and he did.

Woods hit a difficult 9-iron from 157 metres at the par-3 17th, then sank a 5 metre birdie putt after Johnson had missed from a similar distance.

A 3-iron from the 18th tee set up another 9-iron shot, this one from 144 metres and another birdie opportunity for Woods.

Tiger then holed a 2.5 metre putt for a final-round 69 and a one-shot victory over Johnson. His winless two year drought had ended and ended in style.

There haven’t been many highlights since Woods’ personal life unraveled in late 2009, but his play of late clearly signalled a return to form.

Last month Woods held the 36-hole lead at the Australian Open – he eventually finished third – and performed well individually at the Presidents Cup.

Yes, the Chevron World Challenge is an exhibition, just 18 players competing one last time for a truckload of money and world-ranking points before their holidays, but Woods wasn’t taking this tournament lightly.

After each round the former world number was seen practicing on the putting green honing his putting stroke, an aspect of his game that had let in down at The Australian Open.

The World Challenge marked Woods’ 83rd title worldwide, but it was his first victory in the US since September 2009.

Asked if he could characterise his feelings at finally ending his victory drought, Woods just beamed.

“It feels awesome, whatever it is,” said Woods, who is projected to rise from his current 52nd in the world rankings to 21st.

“To go basically head-to-head against Zach all day, it was just a bunch of fun for both of us.”

Paul Casey, who ballooned to a first-round 79, rebounded to finish in third place at five under after shooting 69 on Sunday.

Matt Kuchar and Hunter Mahan finished tied for fourth at four under.

Woods’ victory will send expectations soaring for 2012, yet one thing is for certain – Tiger Woods is a winner again.

Woods is scheduled not to play again until Abu Dhabi at the end of January.