Tiger, Great White Shark teeing up in the Bahamas

Woods makes his long-awaited return to competition for the first time in 10 months after undergoing a fourth operation in April on a long-running back injury. 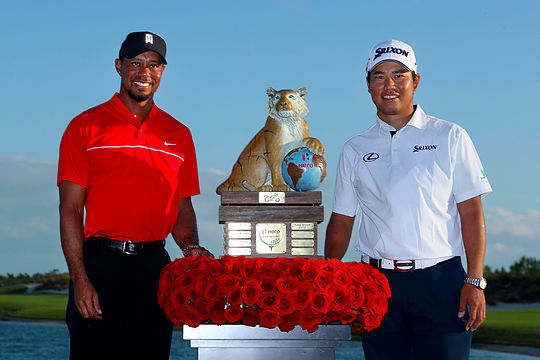 It is the third occasion Woods event is being held on the exclusive Albany course with Japan’s Hideki Matsuyama the defending champion this year.

Just to the east of Albany, the Manuka Doctor Neckar Open will commence Monday (Nov 27th). The pro-celebrity pro-am was first held in 2015 on the Saint Simons Island’s Sea Island Golf Club on Necker Island.

However the destruction caused by Hurricane Irma has forced Branson to move the event to the stunning and recently re-opened Royal Blue course.

While Woods was out practicing Sunday on the Albany course, Norman was having a late lunch with his wife, Kristen in a noodle restaurant within the stunning Baha Mar Resort Hotel and located just across the road from the Royal Blue course.

The double Open Champion then got his first look at the course around 4pm local time managing a few holes before darkness closed in near 90-minutes later.

Manuka Doctor Necker guests will play with pro golfers and celebrities over 27 holes and skills challenges on the Jack Nicklaus redesigned Royal Blue that re-opened in April this year.

Norman will also compete in the Necker Open tennis tournament later this week following the golf.