In what was a fitting end to the day, it was course designer Tiger Woods, and his partner, Justin Thomas, who took the honours at the inaugural Payne’s Valley Cup.

The duo defeated the all-European teaming of Rory McIlroy and Justin Rose but it was not an easy victory with the result literally coming down to the final hole.

The stunning 19th hole, yes there’s an extra hole at the Payne’s Valley Golf Course, is set into the side of a mountain in front of the Big Cedar clubhouse.

The event was split into three six-hole segments and Team McIlroy got off to a great start winning the opening best-ball foursomes before Woods and Thomas evened things up across the next six holes of the alternate shot segment.

In the singles matches, Rose narrowly defeated Woods 1-up while Thomas managed to save face with a 2-up victory over Rory McIlroy to leave the match all-square following the 18th hole.

Designed by Big Cedar’s founder Johnny Morris, the 19th hole, known as Big Rock, is an imposing challenge. Carved into a natural mountainside, the par-3 island green is just 110 metres but leaves no room for error. Think TPC Sawgrass but on a smaller scale. 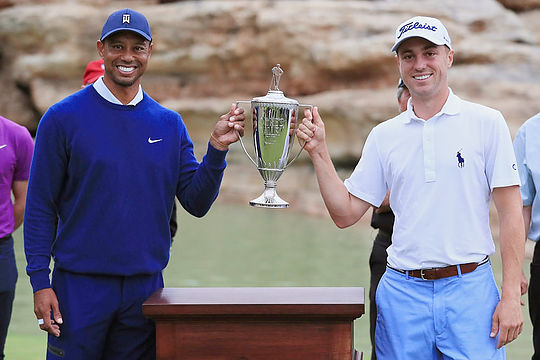 Payne Stewart’s son, Aaron, joined legends Gary Player and Jack Nicklaus as guests at the 19th hole where a $1 million was on offer for a hole-in-one and $500,000 for nearest to the pin.

Thomas was able to put his ball inside three metres and sink the putt and that turned out to be enough to give Team Woods the win following missed efforts from Rose and McIlroy.

“I’m just so proud of everyone who came together to make this possible. It’s awfully special for me,” said Woods.

“It’s great, it is very player friendly which makes it fun. It’s beautiful. It looks like a great place to have a golf trip with friends that’s for sure. Everything is here,” added Thomas.

Payne’s Valley is the first public-access course designed by Tiger Woods in the US and adds to the two par-3 18-hole golf courses already available at the Missouri-based resort.

It is named in honour of Missouri-native and PGA Tour player, Payne Stewart, who was tragically killed in a plane crash in 1999.