Tiger returns to golf with 77 at JP McManus Pro-Am

It’s been two months since a fragile-looking Tiger Woods withdrew from the PGA Championship after a third round 79.

The good news is the GOAT is back but the 15-time major champion looked understandably rusty as he plodded his way around the first day of the 36-hole JP McManus Pro-Am at Adare Manor for a 5-over 77. 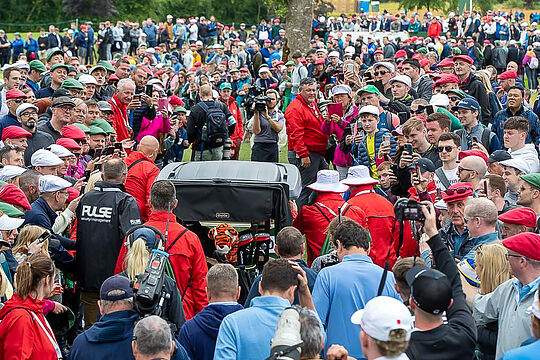 Woods was able to ease his body back into competitive golf by splitting his opening 18 holes between walking the course and using a cart.

Highlights were few and far between for the 46-year-old. His driver was mostly under control with a birdie at the par-4 10th and a chip in for eagle at the par-5 12th buoying the crowd, however, closer to the greens proved to be where the problems lay.

“The team’s doing great…just don’t look at our scorecard. But we’re having fun,” joked Woods during his round.

Woods recorded six bogeys, one double-bogey, a birdie and an eagle to sit almost dead-last in 43rd place although still one shot in front of recent US Open winner, Matt Fitzpatrick.

Recent Travelers Championship winner, Xander Schauffele, continues his top form leading the way on 8-under 64 and three strokes ahead of Rickie Fowler.

Adam Scott is the only Aussie in the field and shares 8th place.

Woods has one more round to play in Ireland before turning his sights to next week’s 150th Open Championship at St Andrews.