(Accordia Golf Narashino Country Club, Japan:) 15-time Major winning Tiger Woods sensationally roared into the lead after turning around three opening bogeys to complete his closing 14 holes in a remarkable nine-under par to share the lead with a 64 on day one of the inaugural ZOZO Championship in Japan.

His score of 64 was Woods’ lowest round since a final day score of 64 to finish second to Brooks Koepka in the 2018 PGA Championship at Bellerive in Kentucky.

Woods was playing off the 10th tee and clearly gave no indication of the fireworks that would unfold on the par-70 Accordia Golf Narashino Country Club course.

But then in his first official event of the new 2019/19 wraparound PGA Tour schedule, and his first since further knee surgery, Woods clearly delighted a huge following in producing three birdies in succession from the fifth hole of his round and then birdied his ninth to make the turn at one-under par.

Woods then grabbed a second hat-trick of three birdies from his 12th hole before ending his remarkable day’s work with birdies on his 16th and closing holes to share the lead alongside reigning US Open champion, Gary Woodland and take a one-stroke lead over local Japan hero, Hideki Matsuyama. 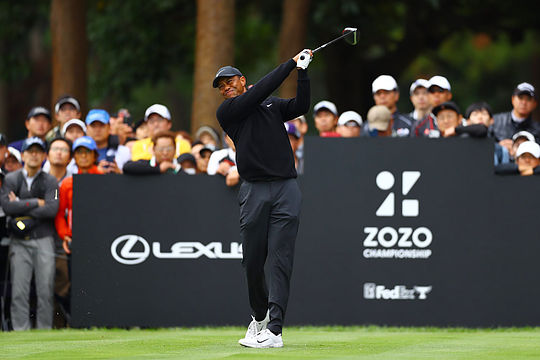 “I certainly was not expecting to shoot 6 under par,” he said smiling.

“That was a very ugly start and to be able to flip it like that, I felt that if I could get to under par for the day after that start, I figure most of the guys would be about 2, 3 under par with the wind blowing as hard as it was today, that I wouldn’t be that far behind. It flipped and I got hot and made a bunch of putts.”

“The people here in Japan have come out and supported this event,” Woods said. “It’s been a lot of fun to play in front of them again, I haven’t done it in a while. I’ve missed it. They’ve always been fantastic with golf and supported their golf here.”

The news wasn’t so good for the three Aussies in the field with Jason Day, who won the Japan Skins on Monday at this very course, and Adam Scott leading the pack in equal 58th place at 3-over with Marc Leishman in a distant tie for 73rd place at 6-over.