Jim Furyk fired a career best 6-under-par-64 to be at 7-under-par and a stroke ahead of Justin Rose following the second round of the Tour Championship in Atlanta.

Furyk, the 2010 FedEx Cup Champion, narrowly leads a tight leaderboard with overnight leader Rose carding a second round of 68 after opening with a 66 to be at 6-under-par. 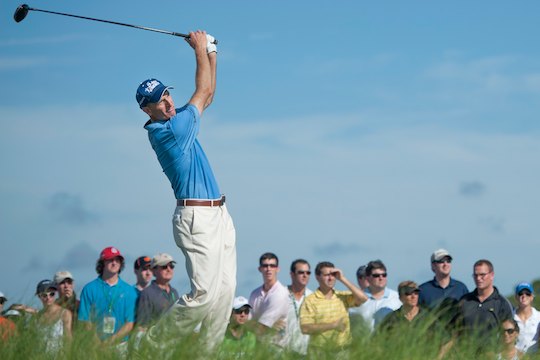 Two back at 5-under-par are Bubba Watson and Bo Van Pelt. Dustin Johnson and Matt Kuchar are at 4-under-par.

Fifteen players are under par, including world number one, Rory McIlroy, who is four shots behind Furyk after rounds of 69-68.

Furyk began his round with with five birdies in his first six holes and held on despite some struggles on the closing six holes.

“It was obviously a fun day,” said Furyk, who was one of four captain’s picks made by Davis Love III for next week’s Ryder Cup in Chicago.

“To be able to write 3 on your card nine times in the first 11 holes was a lot of fun. I struggled to kind of keep that momentum going the last six holes, but I feel like I played a real solid round of golf.”

Tiger Woods, who began the day with a share of the lead with Rose at 6-under-par struggled to a 3-over 73 to be six shots behind Furyk.

Woods didn’t get it close to the hole throughout his round, as he hit just 11 of 18 greens in regulation and 8 of 14 fairways.

He needed 30 putts to complete his round yet the two-time winner this year on the PGA Tour remains up-beat regarding his chances in the season ender.

“I did not play very good today,” said Woods.

“I did not hit it very good, and definitely did not putt well. So it was a struggle all day. I’m still right there. This is a golf course that is playing tough. But some of the pins are pretty accessible. But you’ve got to get the ball on the fairway.”

Adam Scott was another to struggle with the long stick during the second round.

Scott opened with a fine round of 68, only to damage his chances with a 3-over-par 73 to slip fifteen places to be in a tie for 22nd position at 1-over-par.

John Senden is the best of the Australians jumping ten places with his second round 68 to be in a share of 16th position at even-par after opening with a 72.