(Albany, Bahamas:) Tournament host Tiger Woods dropped three shots over his closing two holes in an even-par round of 72 while reigning US Open champ, Gary Woodland and Masters winning, Patrick Reed posted six-under par 66s to head the elite field on day one of the Hero World Challenge at the Albany club in The Bahamas.

Woods, a five-time winner and host of the event, was two-over par after nine holes and then muscled his way through the field in the $3.3m event thanks to birdies at 11, 13 and 14 before the highlight of his round in the bright and windy conditions in grabbing a superb chip-in eagle ‘3’ at the par-5 15th. 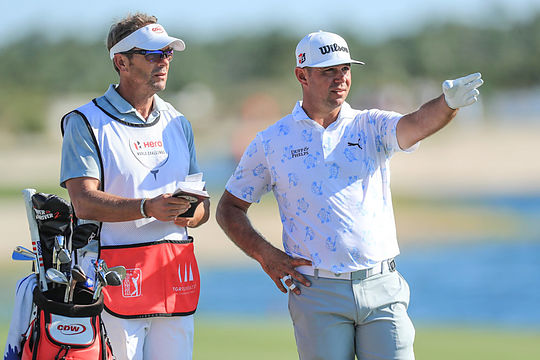 Gary Woodland shares the lead following round one of the 2019 Hero World Challenge (Credit: PGA Tour)

It moved Woods to three-under par only for him to bogey the par-3 17th and find the water at the last in taking a double-bogey ‘6’.

“It was not a very good start and I didn’t play the par 5s well early and then got it going on the back nine for a little bit,” he said.

“The wind was from a different direction to normally, so it should be a little bit cooler than this, but this is definitely a different wind. It blew hard and it was tough all day. The ball was moving a little bit on the greens and had to play for that and it was just a tough scoring day.”

Reed, who was coming off a share of 28th in the European Tour season-ending DP World Tour Championship, turned around a disappointing Dubai week with seven birdies, including four birdies in succession from the 14th hole.

And this thanks to mystery new irons the 2018 Masters champ put into his bag.

“The new irons were good and they actually just threw up my stats while I was just outside and it said I only hit 11 out of 18 greens, but I felt like I hit it a lot better than that,” said the Texan.

“I felt like I hit a lot of iron shots exactly how I was looking at, four, flighting it how I wanted to, holding it into the wind, et cetera. So just kind of one of those things that I feel like the irons were doing well, the swing was doing well as well.”

Reed, who had lead the event on day one a year ago, was asked if he felt it was a risky move to put his new irons into play ahead of next week’s President Cup in Melbourne.

“Normally I would say yes, but I’ve been at home grinding with these a little bit, just not this past week, so I’ve hit them before and so I was comfortable on actually putting them into play this week,” he said.

“Especially when I had four or five of my irons already, the grooves were kind of gone and I was already having to put a new set in, so it was kind of a perfect time to debut them and throw them in.”

And Woodland was delighted after his Bahamas round that included eight birdies and producing a bogey-free inward half of four-under including just 21 putts.

“I drove the ball really well today. The wind’s tough out there,” he said.

No Australians are in the field this week with most players either taking time off or staying local for the Australian Open and next week’s Presidents Cup.

“Obviously you’ve got some big holes out there where you’ve got some tough shots, but I drove the golf ball beautifully and controlled the ball in the wind, which is what you’ve got to do out here. And I saw some putts go in obviously to make a lot of birdies, made some putts, which is nice.”