Tiger struggles on day one of Northern Trust

Tiger Woods continued to struggle posting a mistake-laden four-over par 75 that included three birdies, five bogeys and a double-bogey on day one of the Northern Trust.

Woods’ score saw him end the first round of the $9.25m event in a distant share of 116th place and just one shot off the bottom of the Liberty National leaderboard. 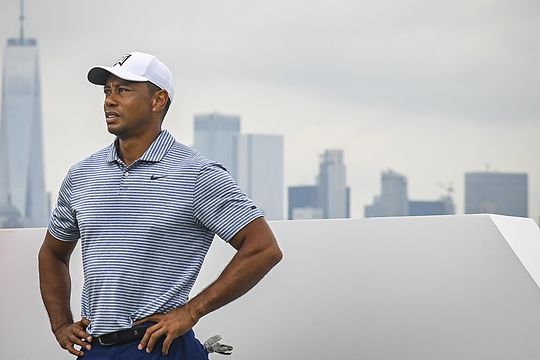 “I just didn’t play well and it was just one of those things where I just didn’t hit any good shots and didn’t make any putts,” said Woods.

Expectations were not as high as usual for Woods, even on a Liberty National course where he was a runner-up in his two previous appearances. This was only his third competitive round since the US Open, and he felt enough stiffness in his back during the pro-am that he only chipped and putted on the back nine.

He said his back was a little stiff Thursday, but that’s becoming the new normal. There are good days and bad, and this was somewhere in between. What bothered him more was being in reasonable position off the tee on all but three holes and not being able to score.

And it was clear early that would be an issue.

He tugged a wedge into a lie so buried in the sand left of the 12th green — his third hole of the round — that he could only blast it out away from the flag. It kept rolling into a bunker on the other side, and he had to get up-and-down for bogey.

After a two-putt birdie on the 13th, his round fell apart.

Woods tried to hit a flat 9-iron on the par-3 14th, the signature hole at Liberty National with a view of the Statue of Liberty and the Manhattan skyline behind her. He pulled it over the flag, over the green and into a 5-foot ditch.

Woods stood at the edge and looked down, hopeful of being able to play from there. The ball was sitting down. There was no chance.

“Even if I had a perfect lie, it would have been one of those practice round things, whereas kids we might try and play it, and hopefully wouldn’t hit ourselves,” Woods said. “But no, it was sitting down.”

He took a penalty drop and faced a flop shot to a green that ran away from him, and he left that in the high grass. That led to double bogey. Unable to reach the green from a fairway bunker on the next hole, he made another bogey.

After a beautiful pitch into the slope on the short par-4 16th that left him a 6-foot birdie putt, he started walking right when he hit it, knowing the pace was too strong.

It just seemed every aspect of Tiger’s game was was flat.

His worst score in these playoff events since the FedEx Cup began in 2007 was a 76 in the final round of this tournament in 2012 when it was at Bethpage Black.

Troy Merritt leads the star-studded field at 9-under with Dustin Johnson another shot back in outright second place.

Cameron Smith and Matt Jones take the Aussie lead on day one following rounds of 4-under 67.

Adam Scott sits in a share of 33rd following a 68 while Jason Day continues to struggle with his game and will need something special tomorrow after a 1-over 72 left him in a share of 92nd.