Tiger Woods returned to the Royal Liverpool course today for a first time in eight years declaring he is ‘getting stronger and faster’.

Woods played a dozen holes, the first to sixth holes and then the 13th through to the last. 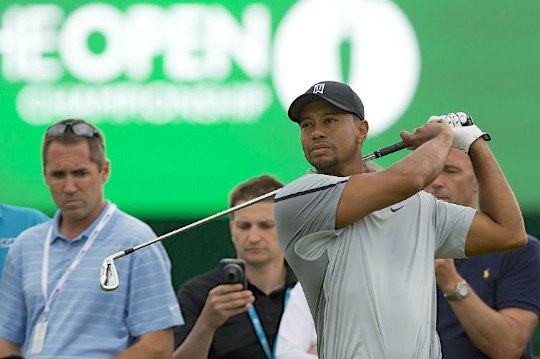 After his round he spoke with good colleague, ESPN’s Bob Harig, about the state of his health and the Royal Liverpool course, and ahead of only his second tournament since last March and Woods much-publicised back surgery.

“I’m not favouring anything,” said Woods said in his interview with Bob.”

“The little baby steps worked. We were very diligent about what I was doing.”

“Going into it we pushed it pretty hard to get my abs and glutes strong so when I did come back I was able to rebound fast. I can do whatever I want. I’m at that point now. We didn’t think we’d get to that point until this tournament or the week after.”

Woods’ last four round event was March’s WGC – Cadillac Championship before undergoing surgery on March 31st for a pinched nerve.

He returned just recently but missed the cut with rounds of 74 and 75 in the Quicken Loans National at the Congressional Club.

“Before I had the procedure, I was at the point I couldn’t do anything,” he said to Bob.

“This is how I used to feel. I had been playing with the back injury for a while and I had my good weeks and bad weeks. Now they are all good.”

“So Congressional was big for me. The fact I could go out there and play and I got better as the days went on. It was a little bit eerie and iffy if that was going to happen or not, especially with how hard I was hitting the ball.”

“But I’ve got my speed back, which is nice, and I’m starting to hit the ball out there again. I’m only going to get stronger. As the weeks go on, I’m getting strong and faster.”

However unlike eight years ago when Woods just hit one driver all four days to capture an emotional third Claret Jug, there were plenty of driver shots from Woods during today’s practice round on a golf course a lot greener than in 2006.

“It’s definitely different, there is no doubt,” he said. “It’s a lot more green, lush, but it’s still playing fast.”

Woods arrived in Liverpool via Switzerland where he is reported to have met with Rolex officials.

One of the first person Woods met on his return to Royal Liverpool was Andy Cross, the now former Club Captain, who had handed Woods the Claret Jug in 2006.

Woods played his first practice round in the company of Patrick Reed and with plenty of interested spectators looking on but ending with light rain falling on the course affectionately known as Hoylake.