Despite the postponement of the Masters this week, five-time winner Tiger Woods has gathered his family together to celebrate his 2019 victory anyway.

Rather than a ritzy affair at Augusta National Golf Club surrounded by past Champions and club chairman, Fred Ridley, Woods’ dinner was a simple affair at his Florida mansion. 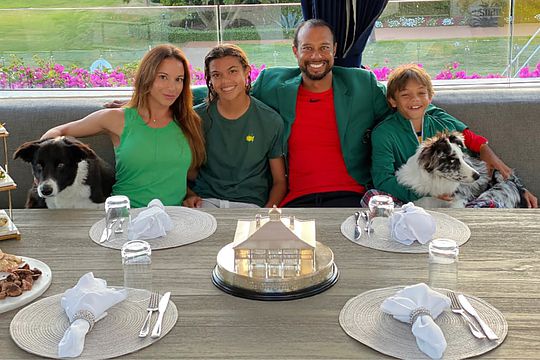 Tiger Woods celebrates with his own Champions Dinner (Credit: @TigerWoods)

On what would have been the day of the annual Champions Dinner, Woods took to Twitter to post a photo of the “quarantine” celebrations.

The Masters dates back to 1934, however, it was not until 1952 that Ben Hogan began the tradition, where the defending champion is asked to choose their preferred menu for the evening.

To celebrate his historic win, Woods had chosen to serve the same menu as that of his 2006 dinner – steak, fajitas, sushi and sashimi although attendees are also allowed to pick something off the club’s menu if what’s on offer is not to their liking.

Earlier this week it was announced that the Masters will now take place the week of the 9th November 2020, one of many tournaments postponed this season due to the ongoing coronavirus pandemic.