Tiger touches down in China for showdown

The two biggest names in world golf landed on Hainan Island off the south coast of China this evening for what is set to be the most highly anticipated and widely viewed 18 holes of golf in Asia this year.

World number one, Tiger Woods, touched down at Haikou’s Meilan International airport last night in a private jet from the US after a 22-hour flight from Florida via Alaska, for what will likely be the 14-time major winner’s only competitive match in the Asia Pacific region in 2013. 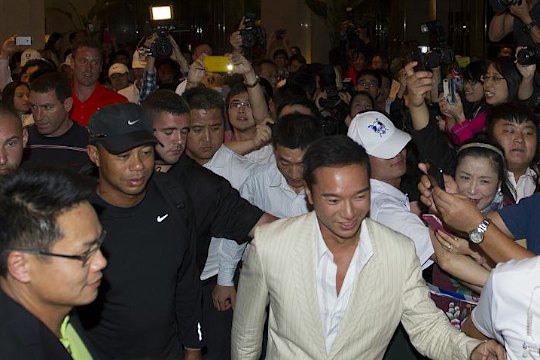 Tiger Woods is mobbed on arrival in Chia for his showdown with Rory McIlroy (Credit: PRNewsFoto/Mission Hills China)

His opponent in tomorrow’s Match at Mission Hills is former world number one, Rory McIlroy.

The Northern Irishman, who enjoys a huge following in China, landed this evening from Shanghai and was in relaxed mood and clearly looking forward to the showdown with his great adversary.

Speaking on his arrival at Mission Hills, the double major winner said, “I played here with G-Mac [in the World Cup] and it was good. It’s a good golf course, a good layout and obviously we had a great chance to win here a couple of years ago.”

“It’s nice to be back and obviously every time we come we get looked after really well.”

“The course suits big hitters and there’s two of those tomorrow! It should be good. I’m playing better, hitting the ball well.”

“I hit the ball really well this week, but didn’t really take any of my opportunities, but playing much better so happy with my game.”

“Spectators and sports fans can look forward to a showcase match, contested by two of the biggest names in world sport. I’m sure it will be a wonderful spectacle for everyone.”