Tiger’s ‘Well I Had A Broken Leg’ response to Daly

Tiger Woods has always been good for one sentence responses when it comes to something controversial.

We saw that today when the 15-time Major winner visited the media centre ahead of this week’s PGA Championship at Bethpage Park. 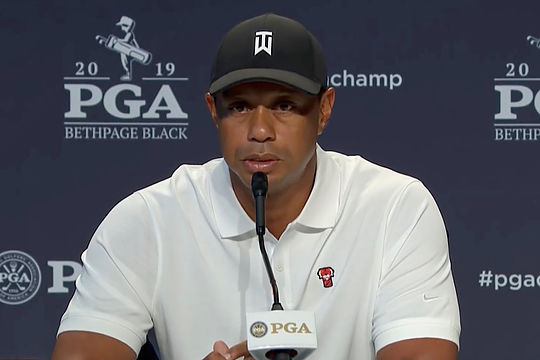 Woods was asked his thoughts on fellow PGA winner John Daly being given approval to ride on a motorised buggy at this week’s event.

The 53-year old Daly, and winner of the 1991 PGA Championship, was last week granted exemption to used a motorised device under the Americans with Disabilities Act.

Daly suffers from osteoarthritis in his right knee.

Woods was asked his view on the decision and his answer was pure Woods.

“Well, I walked with a broken leg, so…” Woods replied, letting out a brief smile.

Woods, of course, is referring to capturing a play-off victory in the 2008 US Open at Torrey Pines, where he was plagued throughout the week by an ailing left knee. He eventually received surgery and missed the rest of the season.

A PGA spokesman said Daly would use a cart with no roof.

Daly has been playing on the seniors tour, which allows for carts, but as a past winner of the PGA Championship he is eligible to play in the tournament as long as he is able.

Daly withdrew from the US Senior Open last year after saying that the USGA denied his request to use a cart. The USGA responded by claiming that Daly’s submitted request “did not support a waiver of the walking condition”.

He was given a chance to provide more information but decided to withdraw, according to a statement posted to Twitter.

It will be an interesting scenario should Woods and Daly find themselves in the same group this week.