Tighe opened his campaign with an 8-under 63 at Riverside Oaks Golf Resorts to lead by two shots heading into the second round. 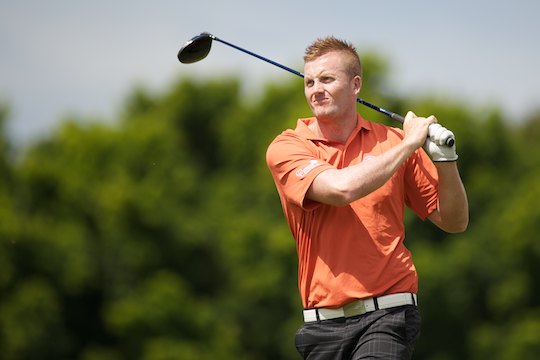 Renowned as one of the longest hitters on the PGA Tour of Australasia it was the flat stick that saw Tighe shoot into the lead.

“I got off to a rough start, I was 1-over through three but I just got the putter hot,” said Tighe.

“It was like a blur of one putts, I was pretty stoked, I made heaps of birdies.”

A change of grip was the secret to Tighe recording his lowest ever score.

“I just changed the grip on my putter yesterday; it feels a little bit new, something different, so it went well,” added Tighe.

With plenty of praise for the Riverside Oaks Golf Resort layout, which has experienced three storms in three days, Tighe believes an even lower number could be out there for him.

“The greens are quite nice; they are pretty true, if you get it on the right line they go in so it’s good,” added Tighe.

“And, there are plenty of reachable par-5s; I hit plenty of lob wedges in today so I guess there could be a lower one out there.”

Sitting two shots off the pace are brothers Scott and Jamie Arnold as well as amateur Jarryd Felton.

“I just want him to do well, I am sure he would feel the same towards me,” said Scott Arnold of his brother Jamie.

“I’d like to see him have a good week but he can finish second, I want to win this week.”

Rounding out the top-5 on 5-under the card are Andrew Martin (VIC), Matthew Millar (NSW) and Clint Rise (TAS).

After an hour delay due to the lightning storms in the area round 2 will tee off, as scheduled, at 7am tomorrow.