Tighe storms to victory at the Nanshan NSW PGA

Lincoln Tighe proved that he has more to his game than just prodigious length with a thrilling come from behind victory at the Nanshan NSW PGA Championship at Riverside Oaks on Sunday.

Tighe was the opening round leader after an eight-under 63 but hot scoring around the Cattai layout all week saw him start the final round a distant five strokes from the lead. However, an impressive 7-under 64 for a total of 19-under 265 was good enough to claim his first title on the PGA Tour of Australasia by a shot from Scott Arnold. 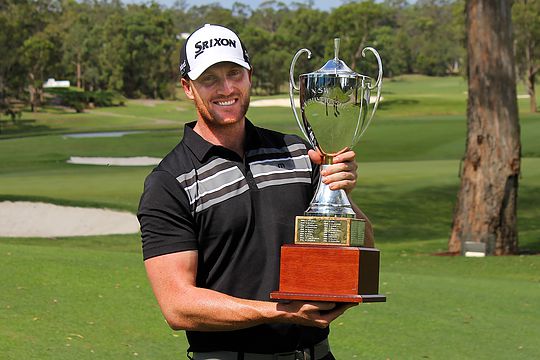 “I got pretty hot early; I was about 4-under through six. The putter was really good, I had five putts in the first six holes,” said Tighe.

“I was hitting it unreal, stumping everything to inside 10 feet, I let a few slide, but it was good to knock that one in on 17 that was a real turning point.”

They say the first win is the hardest to come by and for Tighe, there were some anxious minutes following the round to see if Arnold could bridge the deficit over the final two holes.

In the end, Arnold missed a two metre birdie putt on the final hole which would have sent the pair to extra holes.

“I was big time nervous; it’s the first time I have been in this situation. I was sweating out there on the range, I had to put some music on to calm me down,” said Tighe, who hails from Wollongong on NSW’s South Coast.

“We were talking in the first round about how it’s nice to play well on home soil. I am a very proud New South Wales boy and it’s good to win the NSW PGA.”

Tighe earned $16,500 for the win, Official World Rankings Points and most importantly, comfort in the knowledge that he has playing rights on the PGA Tour of Australasia until 2016.

“This is huge for me, I was actually going back to first stage Tour School,” said Tighe.

“I didn’t want to go back for the fourth year in a row, it’s heart attack central out there. It’s just good that I can have a Christmas at home and not have any worries the next two years.”

The PGA Tour of Australasia now heads to the Gold Coast this week for the Australian PGA Championship, to be played at RACV Royal Pines Resort.