To pick or not to pick, Stricker’s Lefty decision

USA Ryder Cup captain Steve Stricker could be facing one of the biggest decisions in the countdown to next month’s Ryder Cup or is the choice easy?

Does he not pick a presently average-playing Phil Mickelson or does he hand the now 51-year-old current PGA Champion a 13th straight USA team cap? 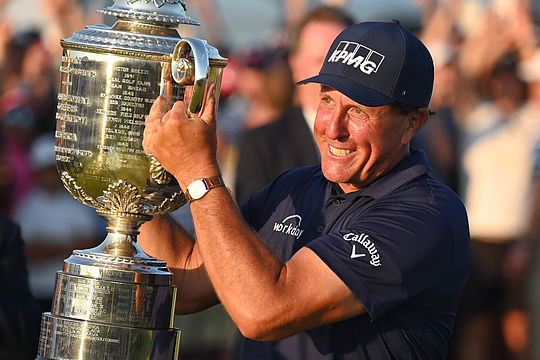 Phil Mickelson won his 6th major title at the 2021 PGA Championship but it may not be enough (Credit: PGA Tour)

Mickelson has been a cornerstone of every USA Ryder Cup side since making his debut in 1995 at Oak Hill but with just two top-20s in his 16 PGA Tour events this year, including of course his stunning victory at Kiawah Island, does he warrant a pick should he not qualify?

It’s probably a question we shouldn’t be asking as you’d think Stricker would be mad not to have someone of Mickelson’s enormous experience teeing-up it at Whistling Straits.

‘Lefty’ is currently 58th on the FedEx Cup standings and has two and possibly three events remaining on the 2020/21 schedule to contest in striving to break into the leading six who will earn automatic selection.

It’s a big ask as the events include next week’s Northern Trust, BMW Championship and the September 2nd starting Tour Championship.

No, Mickelson is not competing this week at the Wyndham Championship.

And in speaking with ESPN, Mickelson has thrown Stricker a real curve ball admitting his game is too inconsistent to be afforded one of Stricker’s six picks.

“I have three events to go this season and I haven’t had a top-10 outside of the PGA,” said the 45-time PGA Tour champion, clearly playing down his chances of selection.

“You can’t take somebody that is that inconsistent. I have three events, here and the two playoff events.”

“And if I finish high in those events and move up on the list, you never know. But you have to have a little bit more consistency and momentum I think.”

If Mickelson’s form does not improve, does Stricker select Mickelson as one of his six ‘wildcard’ picks or not?

I think we all know the answer to that question.