Weather had hampered the tournament with Thursday’s play washed out due to persistent rain, with the second round staged on Saturday before rounds three and four were played in three-balls at the first and 10th tee for as long as the light permitted. 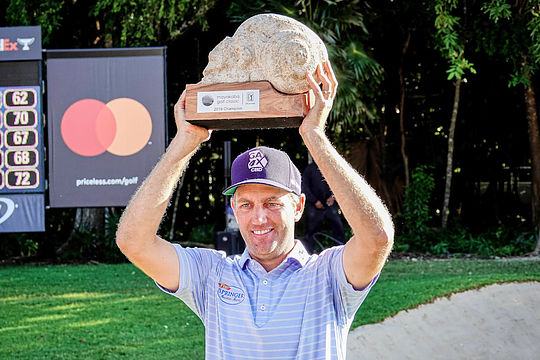 The result left Todd and fellow American Vaughn Taylor as joint leaders at 20-under par with four holes of the tournament remaining on Sunday evening before play was suspended.

On Monday, Todd eventually carded a closing three-under-par 68 to finish on 20-under-par, one clear of Mexico’s Carlos Ortiz, Adam Long and Taylor.

Todd, the winner of the Bermuda Championship just a fortnight ago, was ecstatic with his back-to-back PGA Tour wins.

“It’s incredible. I’m overcome with emotion right now,” said Todd. “The whole final round was much more nerve-racking for me than Bermuda.”

Todd’s back-to-back wins on the PGA Tour are impressive given how he basically hit rockbottom on tour just a few years back. He’s a 34-year-old PGA Tour journeyman, who suffered through a stretch of missing 37 cuts in 41 starts between 2016 and 2018 and plummeted to No. 2006 in the world at the start of the year.

Then came his win early this month in Bermuda and now his win on MOnday. In a space of a month, Todd’s golfing career has swung completely around.

Todd sought answers from multiple teachers, but nothing seemed to help. A good friend from his former college, the University of Georgia, then suggested that he consider working with Bradley Hughes, an Australian who won seven tournaments around the world as a professional before becoming an instructor. Todd bought Hughes’s $9 instructional e-book “The Victors,” and then called Hughes. The rest is now history.

Todd has now earned himself the security of a two-year exemption, berths in the Sentry Tournament of Champions and Players Championship. It represents a marked turn around and proof that self-belief, hard work and the right coach can bring results.

“I think I’ve been playing well for awhile,” said Todd, who has been in the 60s his last nine competitive rounds.

“The confidence that gave me, winning in Bermuda and putting up four rounds in the 60s, it’s natural to take that confidence to the next event. I was able to do that and I’m really happy about that.”

Rhein Gibson and Jason Day missed the cut, with Day firing a second round 77.