Todd Sinnott has fired rounds of 74-68-67-72 for a two stroke win over Geoff Drakeford at the The Dunes Medal in Victoria. 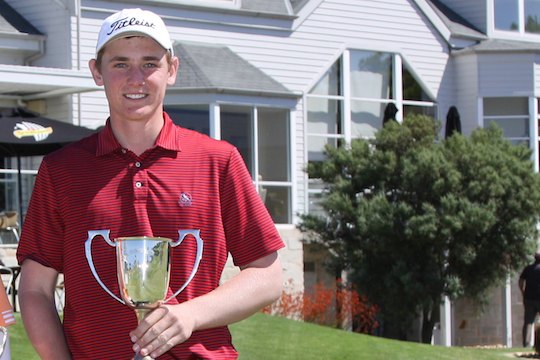 Sinnott took a four stroke advantage into the final round following a stellar second round of 68, achieved in horrific conditions which he followed with a third round 67 to close the tournament at 7-under-par.

“That’s where the difference was with my second round,” said Sinnott.

“I managed to post a low score when the rest of the field struggled. That was the best 68 that I’ve ever posted.”

This is Sinnott’s first full season out of the junior ranks, and already the 19-year-old is getting noticed for his solid game and impressive ball striking.

During the 2011 US amateur season, Sinnott did not miss the cut in each of the main events he entered – including a top-10 finish at the Players Amateur.

“I learnt so much playing in the US,” says Sinnott.

“You play against the best amateurs in the world and when you come back home you feel you can compete and win our events here.”

“Certainly, it made the difference this week and I felt I could win and I kept my game together. It’s all about experience and being in the situation to win tournaments.”

Sinnott has won previously, however his victory today at the Dunes Medal is his biggest title to date.

Sinnott was the 2009 Victorian Boys Champion and last season he secured top-10 finishes at the Riversdale Cup and Mandurah Easter Amateur.

The Dunes Medal is his first main amateur win outside the junior ranks.

“You always want to win a National Selection tournament as these are our biggest amateur events. To get this win early in the season is also a confidence booster for me with the Victorian Amateur and Victorian Open coming up.”

Sinnott certainly has the foundations and ability to become a top-10 world amateur player and progress to the next level.

A product of the Victorian Institute of Sport, Sinnott’s game continues to evolve under the watchful eye of Marty Joyce.

“The system with the VIS is fantastic and the support you get both on and off the course suits me perfectly.”

With immediate plans to perform well this Australian summer before returning to the US for his second tour, Sinnott knows there’s considerable work ahead to achieve his goals.

“I’m looking forward to playing the professional events like the Victorian Open next month and returning to the US to play well there.”

“It’s great to finally get a big amateur win and it motivates you more to achieve another. It shows that all the effort is worth it.”