Todd wins with a little help from Down Under

World number 525 Brendon Todd fired a 9-under final round of 62 to win his second PGA title with a four-shot win at the inaugural Bermuda Championship. 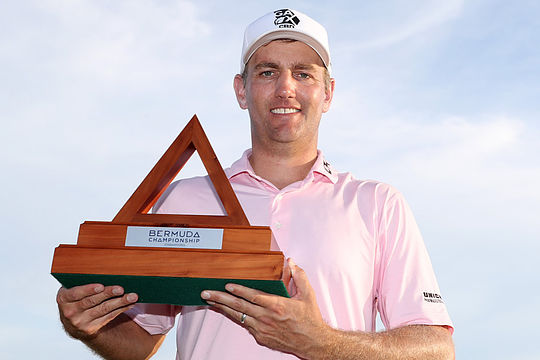 Sunday’s win was a marked turnaround for the American who had earlier thought about moving on from the game. But a recent move to a new coach, Aussie Bradley Hughes, has brought new life and a future to his game.

“A year ago I was talking to my manager about potentially opening up another business and not sure if I was going to keep playing,” said Todd. “So to turn it around in one year and regain status and then have a big win this like this is just a dream come true and hopefully a springboard to a really long, successful career out here.”

Todd engaged Hughes, a former PGA Tour player, at the beginning of the 2018 season and the results followed.

In 11 starts last season, Todd recorded four top-25′s and made US$252,546, to get into the Korn Ferry Tour Finals, where he earned his PGA Tour card back. With Sunday’s win, Todd has earned a two year exemption on tour and starts at the Sentry Tournament of Champions, the Players Championship and the PGA Championship.

Rod Pampling was the best of the Australians finishing in a share of 31st position, making the cut the first time this season, following missed cuts at A Military Tribute at The Greenbrier and Shriners Hospitals for Children Open.

Rhein Gibson finished in a share of 35th position having started the tournament with three consecutive rounds under par for the first time since the 2016 American Express.