American David Toms held off fellow countryman Dicky Pride with a par on the first play-off hole to win the Ascension Charity Classic on the PGA Champions Tour in St Louis.

The 54-year-old Toms scrambled for par on the 18th in regulation after driving left into a fairway bunker. He shot a 5-under 66 to finish at 10-under to force the playoff after Pride closed with a 67. 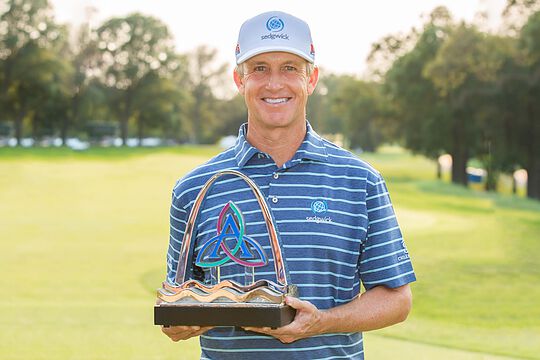 Toms won the 2001 PGA Championship for one of his 13 PGA Tour titles, and took the 2018 US Senior Open for his only other victory on the PGA Tour Champions.

“I still work hard. It’s tough,” said Toms. “I mean, guys prepare every week, they play great. Means a lot obviously, it means a lot. I felt good all week here. It felt like a PGA Tour event with the crowds and everything, the build-out.”

The victory was Toms’ first in three years since winning the US Senior Open, although he’s carded a runner-up at the Insperity Invitational and a share of third at the Dick’s Sporting Goods Open to add to his nine top-10 finishes on the Champions Tour so far this season.

Rod Pampling had opened with solid rounds of 69-66 to sit in third position going into the final day but a closing round 74 saw him drop twenty places to finish in a share 23rd position. John Senden finished in a share of 29th followed by Stephen Leaney, David McKenzie and Robert Allenby.

Pampling is currently the top-ranked Aussie on the money list at 10th, having banked a tidy US$1,557,885 in earnings so far this season.