The Australian Men’s and Women’s Amateur championships start today in Melbourne with the 36 hole qualification series being held at Spring Valley and Woodlands Golf Clubs. 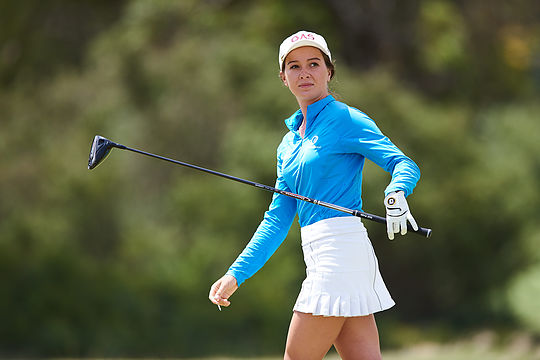 A large international presence is at these championships both from Japan, England and Germany. In the women’s championship Becky Kay (pictured), Stephanie Kyriacou, winner last week at the Australian Master of the Amateurs, Grace Kim and Doey Choi are the players to watch.

Kay played solid golf last week and will be looking to advance four better this week. Kyriacou will be full of confidence following her top amateur win and is in superb form leading into this event. Choi has played well this season overseas and also will be a player to watch.

In the men’s championship, keep a close eye on Blake Windred. The 21-year-old finished strongly last week at Royal Melbourne putting on a masterful display of clutch putting and pure ball striking. Whilst the greens at Woodlands and Spring Valley are nothing in comparison to Royal Melbourne’s, Windred looked composed all week and ready to strike to win another title.

Whilst the American presence is not here this week, Japan has fielded a solid lineup of men players, headed by Keita Nakajima, who will be looking to make amends to his finish last week at Royal Melbourne.

Nakajima is the defending Australian Amateur Champion and apart from his 72nd hole implosion last Thursday, played solid golf. England’s Tom Sloman is also another to follow as he acclimatises to the Australian conditions.

Matias Sanchez, winner of this championship in 2017, will also be worth following along with fellow victorian David Micheluzzi, who is the highest R&A ranked player this week at 7.