The 2019 Australian Interstate Series got underway this morning in Tasmania with the Men’s teams doing battle at The Tasmania Golf Club and the women’s being contested at Royal Hobart Golf Club.

The Victorian Men’s team will be looking to see three from three wins in the series as they outlay a relatively new team. 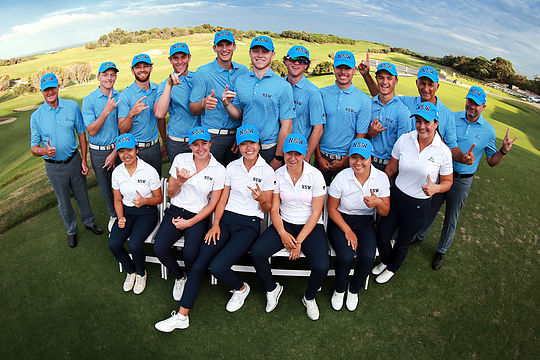 Last year’s final at The Grange in South Australia with Queensland was arguably one of the finest Interstate finals seen for some time with the result coming down to one putt on the last hole in a tense victory for Victoria’s number 1, David Micheluzzi, who pipped Shae Wools-Cobb to give the Victorians a 4-4 result.

Both Micheluzzi and Wools-Cobb are not playing these series, leaving the top-order spots with former Aussie Amateur champion Matias Sanchez heading the Victorian lineup well supported by the experience of Blake Collyer and Kyle Michel.

Queensland will be headed by Jediah Morgan, Christopher Crabtree, who won the Riversdale Cup a few months back and Louis Dobbelaar. Last time the Interstate Series was played at the Tasmania Golf Club in 2013 the Queensland team was victorious and they will be looking to do the same this year.

NSW last won the Interstate Series in 2016 at the Brisbane Golf Club in Queensland.

The NSW team is solid from top to bottom and should challenge for the title. Blake Windered was a member of the 2016 team and will spearhead NSW in these series, along with Nathan Barbieri, who has played stellar golf this season with runner-up finishes at the NSW and Australian Amateur.

Women’s defending champions, New South Wales, have an opening match against Victoria, in what is set to be a pivotal match towards defending their title at Royal Hobart Golf Club. Victoria will be looking to get off to a solid start as they will encounter a rising QLD team in the afternoon.

Victoria last won the Interstate Series in 2017 at Royal Fremantle having also claimed victory in 2015 and will be spearheaded by Stephanie Bunque, who is coming off an impressive Australian summer.

The NSW lineup is full of experience with Grace Kim, Doey Choi, Stephanie Kyriacou, winner this year at the Australian Master of the Amateurs, and Kelsey Bennett. Should the Victorian get that early victory, they will take some stopping.

Queensland is the ‘sleeper’ team in these series being a relatively new lineup but one that is packed full of talent all the way through.

Queensland last won the series at home in 2016.