Eight players are within four strokes of opening round leader DJ Loypur at the Australian Master of the Amateurs being played at Royal Melbourne.

Loypur, a qualifier for the event, fired an opening round 6-under-par, 66, for a stroke lead over Victorian Amateur champion, Nathan Holman.

Holman was unlucky not to be in the share of the lead, missing a makable three foot birdie putt on the 16th and finding the fairway bunker on the 17th before saving his par.

Holman’s round of 67 was otherwise a display of precision golf against a field that’s littered with international talent.

US Amateur champion and Australian Open amateur medalist, Kelly Kraft, remains in contention after an opening round of 70 to be in a tie for fourth position.

It was only the second occasion Kraft has played the West Course at Royal Melbourne, which includes eleven of the eighteen holes used at the Presidents Cup last November, and his round could have been lower but for a lost ball on the third and a couple of putt that fell agonisingly shot of their target.

With the advantage of having played Royal Melbourne a few times, Kraft remains threatening to claim this title and being only four from the leader, his 2-under-par round certainly did his chances no damage.

Anthony Murdaca and Daniel Nisbet are in a tie for third position after opening with a 3-under-par, 69, a stroke ahead of five players including Kraft, Wester Australian Ryan Peake, Australian Amateur champion Matt Stieger and England’s Neil Raymond, who opened with rounds of 2-under-par 70. 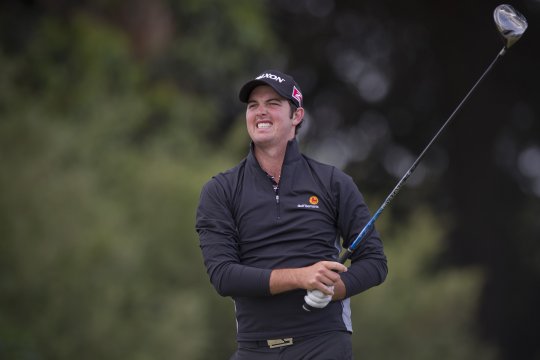 Ryan McCarthy reacts to his drive on the 4th at Royal Melbourne on his way to a even par 72 at the Australian Master of the Amateurs. (Photo: Anthony Powter)

James McMillan fired a 1-under-par 71 to be in outright tenth position.

The youngest player in the field, 13 year old Tian Lang Guan from China, finished even-par and in a tie for eleventh position along with Ryan McCarthy.

With no cut at the Australian Master of the Amateurs the tournament remains an open affair and in the past has transcended into an event where consistency is rewarded.

Any player who cards four solid rounds in the high 60′s will have a chance as Royal Melbourne is a layout that rewards the thinking player.

At just under 6200 metres, the West Course is not overly long by modern day standards, yet it’s punishing to the unfamiliar and the player that does not show the grand lady respect.

That is it’s beauty, properly executed shots are rewarded and you simply cannot bomb it out there thinking you will score low. Ask any member and placement off the tee is the key to scoring low, not length.

Tournament experience will also play a major part at Royal Melbourne and with the names of Holman, Kraft, Stieger, McCarthy and Raymond all within reach of the leader and major amateur title holders, this Master of the Amateurs will be another corker of a tournament.