Top amateurs to do battle at 111th Riversdale Cup

This year’s Riversdale Cup marks the 111th staging of the tournament making it one of the oldest amateur golf tournaments in the world and a sought-after trophy by our elite amateurs.

The men’s and women’s event starts tomorrow at Riversdale Golf Club, south east of Melbourne and sees the 2018 champions Becky Kay and Jack Thompson returning to defend their titles. 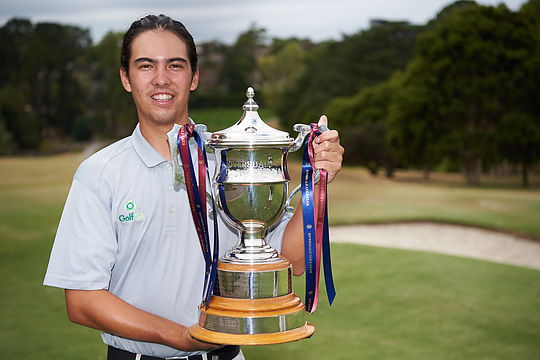 Over 200 men and women nominated to contest the four-day, 72-hole event with the men’s field limited to players above +0.8.

Riversdale’s general manager, Christian Tanner, said the club’s members were thrilled with the level of interest and were looking forward towards staging another successful tournament.

“We have had to narrow the men’s side of the draw to 120 places and the women to 48,” said Tanner, who has being instrumental in the staging and running of this event.

“The tournament continues to produce great champions and we are proud of the event’s rich history and the place it plays in developing the next wave of professionals. Many of our winners have gone onto play on the world tours.

The Riversdale Cup is recognised as one of the leading amateur golfing events in the country and the numbers nominating to play reflect that fact.”

Last year Thompson from the Grange Golf Club in South Australia secured his biggest win finishing at 14-under-par for a five stroke victory over Royal Melbourne’s William Heffernan. Thompson fired rounds of 69-64-68-73 to leave the rest of the field in his wake.