There will be a strong Australian presence when the NJCAA D1 Men’s National Championship starts this Thursday at the Odessa Country Club in Texas.

Five Aussies have qualified in what is considered the highest level of tournament in the NJCAA Division, which is a combination of both a team and individual event. 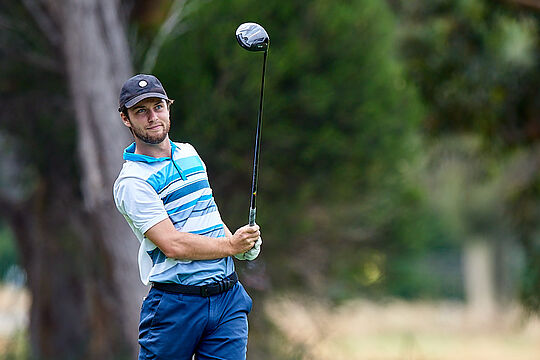 College teams throughout the top division have punched their ticket via respective Regional qualifiers, as well as a small number of individuals who finished in the top-10 in Regionals who where not otherwise in a qualified team.

Two of the Aussies will play in the number one position for their team with South Australia’s Frank Vucic the top-order player for Indian Hills CC and Aidan Powter from NSW, (pictured), the number one player for Ranger College. Powter was also recently named in the All-Tournament team during the South Central Regionals.

Adam Coull from NSW is Midlands’ CC number three player, with Midlands the top-seeded team out of the 24 qualifying teams following a stellar season for the Cardinals, which includes three wins.

Tasmania’s Ryan Thomas and Queensland’s Mitchell Revie are also members of the Indian Hills outfit who qualified in the Central District.

The Nationals, or ‘Natty’ as the tournament is commonly referred to, is the pinnacle championship of the season where a five-man team plus an alternate play four rounds of stroke-play with the top four scores counting for the team daily total over four days of play.

A number of PGA Tour players have come through the NJCAA college system, including Bubba Watson and Australian Open winner Abraham Ancer.

These championships will see Adam Coull and Aidan Powter playing their last NJCAA event with both moving to the NCAA next season, Coull signing with the University of Memphis and Powter with Carson-Newman University.

The strong Aussie presence within the US collegiate system is testament to the opportunities the system offers to our players who are prepared to play outside their comfort zone and leave the Australian system.

Make no mistakes the collegiate system is not for the faint hearted as scholarships are hard to come by and players mostly have to earn their spots on the team for each event based on scoring averages. The system shows little or no favouritism in team selection which is common under other systems, including here in Australia.

The US Collegiate golf is considered by many as the ultimate proving ground for aspiring professionals.