Six of Australia’s best amateur golfers, including defending champion Antonio Murdaca, have confirmed their commitment to participate at the 2015 Asia-Pacific Amateur Championship. 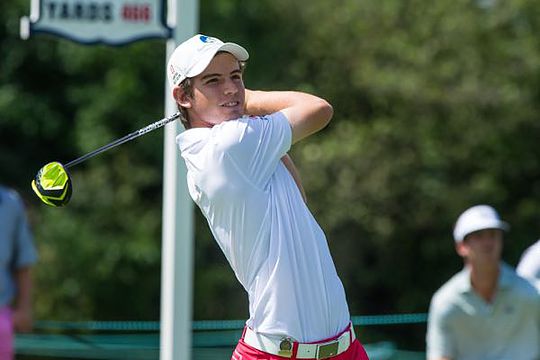 The AAC is played annually at a different venue throughout Asia-Pacific. Organised by the Asia Pacific Golf Confederation in conjunction with the Masters Tournament and The R&A, the champion receives an invitation to the Masters and, along with the runner-up, gains entry to The Open Qualifying Series for The Open.

Hailing from Adelaide, Murdaca won by an impressive seven strokes a year ago in front of his home crowd to become the first Australian to win the title.

His form has been solid this season, recording a win at the South Australia Amateur Classic and an 11th-place finish at the St Andrews Links Trophy. He also finished 10th at Stage One of European Tour Q-School on the weekend in Germany and will move through to Stage 2.

The 20-year-old missed the cut at the 2015 Masters but nonetheless found the experience a valuable one.

“I remember playing so well at the AAC last year and it was a dream come true to be at the Masters amongst all the greats,” Murdaca said. “I learned a lot from the experience and it has really helped me with my game since. I am looking forward to playing in Hong Kong in a few weeks and hope I can repeat my form from last year.”

Ryan Ruffels is the current number one amateur golfer in Australia. A regular in the world’s top 10 amateurs, the 17-year-old finished three places behind Murdaca at the AAC last season, and won the Callaway Junior Golf Championship.

He made headlines in 2013 when he became one of the youngest players in Australian Open history to make the cut, and subsequently finished in an impressive 24th place.

Lucas Herbert has been a consistent performer at the AAC, finishing eighth and fourth in 2014 and 2013, respectively. A native of Victoria, Australia, the 19-year-old was the leading amateur at both the Australian Open and Australian Masters last season and recorded top-three finishes in three other tournaments.

Cameron Davis, Jarryd Felton and Travis Smyth will round off a strong Australian contingent at the 2015 AAC. 20-year-old Davis impressed with his win the 2015 Australian Amateur while Felton finished at a respectable seventh place at the Southern Amateur.

Smyth, of New South Wales, made his break through last year when he won the Queensland Men’s Amateur Championship. Felton finished 12th at the 2014 AAC while Davis and Smyth will be making their debut at the event next month.

Since its inauguration in 2009, the AAC has produced an impressive list of winners, including two-time champion Hideki Matsuyama of Japan, who has recorded top-20 finishes across all four Majors since turning professional in 2013, and 2012 AAC champion Guan Tianlang, who made headlines in 2013 when he became the youngest player ever to make the cut at the Masters.

Continuing under its banner of ‘Creating Future Heroes’, the AAC will feature 120 players from the APGC’s 39 member associations and will be played over 72-holes of stroke play, with a cut for the leading 60 players plus ties after 36 holes.

The event will be televised live on Fox Sports in Australia.