Top class field for Master of the Amateurs

There are few amateur tournaments on the world golfing circuit that rival the Master of the Amateurs.

When you walk down the driveway leading into Royal Melbourne this week you confront an impressive array of banners of past winners. 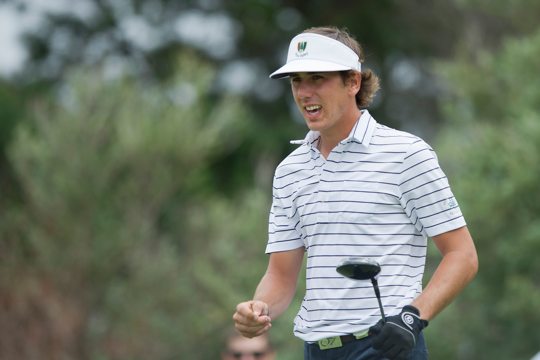 More recently the likes of Mark Anderson, Jordan Sherratt and US-based Tarquin Macmanus have donned the green jacket to claim the title. Their name sits along side previous victors as you make your way to the clubhouse.

PGA Tour player, Rickie Fowler, who toured Australia in 2009 has remarked it’s one of the best events he played as an amateur.

The field attending Royal Melbourne is a truly international affair and it’s fully of talent.

The internationals include US Amateur Champion and world number four, Kelly Kraft – Amateur Medallist at the Australian Open, and China’s Tian Lang Guan, winner of the 2011 China Amateur Open.

Lounghrey had toured Australia previously with impressive results with a top-10 finish at the 2011 Riversdale Cup and played strongly at the Ashes series at Monash last March where the English smashed the Australians.

New Zealand is also well represented with the ever talented Ben Campbell heading the Kiwi line-up.

Both Campbell and Perry are capable of claiming arguably the most prized amateur title in Australia.

It is easy to see why many of our young guns and the world’s best want to play and win the Australian Master of the Amateurs.

The event started with a vision that Peter and Angela Mann shared more than a decade ago, namely to create one of the world’s best amateur tournaments and to let aspiring players ‘live the dream’.

Since these formative beginnings the tournament has gone from strength to strength.

To the victor go the spoils with starts at the British Amateur, Porter Cup, the Players Amateur, the Dogwood Invitational and the Canadian Men’s Amateur.

Play-offs are not uncommon at the Master of the Amateurs.

In 2009 Jordan Sherratt won the title on the first play-off hole from American, Bud Cauley, to secure his biggest amateur win. The previous year American Mark Anderson held off a determined Rickie Fowler to win in another play-off at Yarra Yarra.

The added feature with the tournament being played on the majestic Royal Melbourne layout adds to the fabric of this wonderful event.

We are guaranteed four days of stellar golf on one of the world’s best golf courses.

All participants have made their way to Royal Melbourne this week through either qualification or by invite – that alone gives you an indication as to the status of this event.

It is amateur golf at its best.