The New South Wales Amateur Championship is a true test of golf that produces worthy champions. 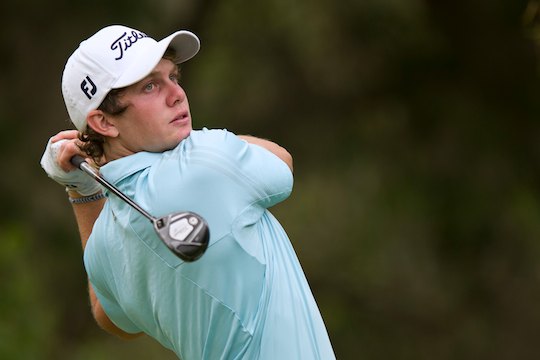 Geoff Drakeford will be seeking to add the NSW Amateur title to his 2011 Cobram Barooga Open win this week in Sydney (Photo: Anthony Powter)

Incorporating the NSW Medal (the Stroke winner after four rounds) and the 2011 NSW Champion of Champions (each Club Champion in NSW competing for the title), this year’s championship has attracted a stellar amateur field.

The NSW Medal will be played at Mona Vale and Long Reef Golf Clubs starting this morning.

The Medal is four rounds of 18 holes stroke play, played over three days – 18 holes on the opening two days, and 36 holes on Friday. The leading 60 players plus ties after the first 36 holes qualify for the final 36 holes which will be played at Mona Vale Golf Club.

The leading 32 players from the NSW Medal will compete in the NSW Amateur Championship Match Play. Each match is played over 18 holes other than the Final which is played over 36 holes. The match-play will be seeded and will be played at Elanora Country Club starting 6 February 2012.

Who then is likely to claim the titles on offer this week in Sydney?

Brett Drewitt will take some stopping around his Sydney base at Long Reef. The South Australian Classic winner knows the Long Reef layout and is one of the best ball strikers in the wind.

Winless since his Adelaide victory last March, the Inverell native is ready for another main title to add to his 2010 Queensland Amateur win and his international victory at the Pacific Northwest Amateur, which was Drewitt’s major match-play victory.

Drewitt last year made it through to the top-16 and should challenge again this year and I favour his chances to take the Medal and from there will take some stopping during the match-play segment, which Drewitt is a well known exponent having secure two of his main three victories under the match-play format.

Geoff Drakeford continues to impress with his solid ball striking and comes off a solid performance a fortnight ago at the Australian Amateur where the Victorian progressed to the quarter-finals.

Drakeford is also off a top-15 finish last week at the Lake Macquarie Amateur and has the power and game to capitalise on the par 5′s at the Mona Vale and Long Reef layout.

With a runner-up finish to Todd Sinnott at The Dunes Medal and a third place finish at the Port Phillip Amateur, Drakeford is a player to follow this week.

Jordan Zunic is another young-gun to emerge recently with a strong game and enters these championships with an impressive result at the Australian Amateur where the Bonnie Doon player from Sydney’s eastern suburbs made the semi-finals.

Zunic was the 2010 NSW Boys champion and secured a tired 3rd place finish at the 2011 Mandurah Eastern Amateur. Should Zunic progresses to the match play segment, he’ll prove problematic for the established players.

Higginbottom is our highest world ranked amateur and a multiple winner with victories at the 2011 Queensland Amateur, Keperra Bowl, Junior Masters and China Amateur Open.

Earlier in the year, Higginbottom finished runner-up at the NSW Open and collected solid finishes at the Australian Open, New Zealand Open and the NSW PGA championship. This experience will give Higginbottom the added advantage over this field and you would expect another strong performance this week from the Novcastrian.

It would be hard not to go past the stellar efforts Daniel Nisbet has produced recently.

His consistency has been nothing short of stunning and Nisbet certainly starts as a tournament favourite this week.

The world number 56 is a twice winner in the UK with the Wiltshire Country Amateur and Westwood Trophy and is a seasoned campaigner. Should Loughrey progress to the match play segment, he’ll take some stopping.

Keep an eye out for the talented Oliver Goss from Western Australia.

Goss scorched Royal Melbourne’s West Course during the Master of the Amateurs with an impressive 64 to record a top-10 finish and was runner-up at the Australian Amateur Medal.