The Western Amateur Championship begins today at North Shore Country Club in Glenview, north of Chicago and boasts arguably the strongest ever assembled field for a top amateur tournament. 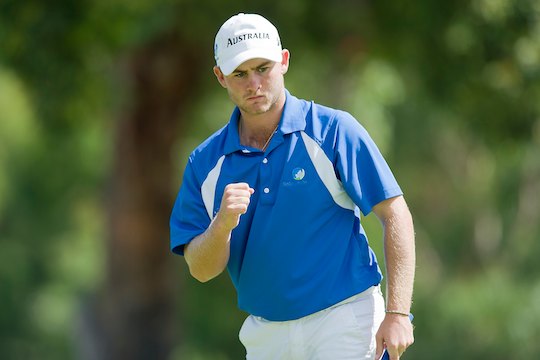 The top-4 include England’s Tom Lewis, who led the British Open after round one and secured the Amateur Medal, USA’s Patrick Cantlay, Peter Uihlein and Russell Henley.

Lewis toured Australia last summer where he also secured the Amateur medal at the Australian Open in November, which came just a week after being denied victory by tour journeyman, Peter O’Malley, on the third extra play-off hole at the NSW Open.

Conducted over five days, the Western Amateur puts every aspect of a player’s game to the ultimate test, both physically and mentally.

Friday is the first two rounds of elimination match play, followed by the semifinal and championship matches on Saturday.

Eleven Australians and three New Zealanders are in this week’s field.

Macpherson created history in becoming only the second Australian to win the British Amateur title back in June when he defeated Scotland’s Michael Stewart, 3&2, at Hillside Golf Club in England.

Supporting Macpherson is another US-based Aussie, 2011Master of the Amateurs champion, Tarquin MacManus.

MacManus has arguably being our best performer this US summer with a runners-up finish at the Southern Amateur and only last week was in the hunt at the Porter Cup where the world number 61 secured another top-15 finish.

MacManus has the experience and game to challenge this field and like MacPherson, should strongly contend in Chicago.

Despite some results that have been below par in recent tournaments, a quick training camp put on by Golf Australia in the US for the GA Elite squad has rejuvenated Stieger as he looks to claim a main American title.

Another Aussie to produce some late form is Ryan McCarthy.

McCarty is returning to the game following a shoulder injury incurred whilst playing the Lake Macquarie Amateur last January and last week at the Porter Cup secured a top-15 result with some impressive rounds.

Last year McCarthy made the top-16 at the US Amateur, the only Australian to make it that far, and our former number one ranked player thrives under challenging conditions.

The Western Amateur has fallen into Australian hands before, Bronson LaCassie won the title in 2006.

Michael Sim finished runner-up in 2005 and Kieran Pratt produced a stellar result making the semi-final last year at Skokie Country Club only to be denied a finals appearance by Gregor Main on the 19th after making birdie on the 18 to force the sudden death playoff.

Main would be denied the title by Standford’s David Chung with a 2&1 victory.

Chung has returned to defend his title and was aware the challenge would be presented against the high class field.

“You have to be within three or four strokes of the leader to get into the sweet 16, and that takes a lot of great play,” remarked Chung.

“You really have the top 16 guys who are playing their best golf that qualify. You can’t really have an upset in the match play portion. That, in itself, is really cool. And once you get into match play you’re playing a lot of golf against really good opponents.”