As the highest ranked player in the upcoming Queensland PGA Championship field, former champion Kurt Barnes says 2012 is his year.

Heading back to Toowoomba where he finished in a tie for 6th in 2011 Barnes, a big talent that he admits has gone somewhat unrealised in past seasons, is getting serious about his golf. 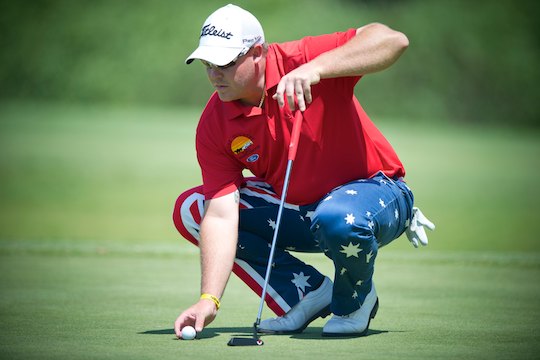 Coming off a successful 2011 season in which he won twice on international tours; first on OneAsia in May and again on the Japan Tour in September, Barnes concluded last year with two Top 15 finishes in the Australian PGA Championship presented by Coca-Cola and the JBWere Masters.

And, while he kicked off his year with a second place finish at the Victorian Open, Barnes says he still has work to do to accomplish his goals for 2012.

“My game wasn’t really where I wanted it to be at the Vic Open, I’d had a bit of time off with not much practice and in the end it was my mistakes that cost me the win. It was somewhat a missed opportunity,” he said.

But with increasing confidence following his most successful tour season since turning pro in 2003, the now 30 year old says he is finally learning the lessons from eight years on Tour.

“I came onto the amateur scene quite quickly, a guy from the country that nobody knew about. I hit the ball a long way and really relied on natural ability but I’ve finally realised that natural ability doesn’t cut it in golf, especially at a high level. You need to really work at it.”

“I turned 30 last year and they say golfers hit their peak in their 30’s so hopefully the next 10 years will be my best ever.”

On paper, as the 12th highest ranked Australian in the world, Barnes looks to have the edge over the Queensland PGA Championship field which is set to include the likes of Andre Stolz, Peter O’Malley, Craig Parry, Scott Laycock, Ashley Hall and defending champion Gareth Paddison.

A former winner of the Charles Bonham Trophy, the Queensland PGA Championship holds great memories for Barnes who played a lot of his early golf on the state’s Sunshine Tour, but with World Rankings points now on offer for every PGA Tour of Australasia event, he says his next tournament is about much more than just a win.

“World Ranking points are big. Obviously I want to try and get as far inside the top 100 by the end of the year as I can, if not get there sooner. It’s just a matter of playing well and then the points will come with performance,” said the current World No. 136.

“If I can go to the Queensland PGA and win I could be in the top 100 by the start of March. But it’s also hanging on to those points that’s the challenge. Once you start performing you’ve got to keep performing.”

Following the Queensland PGA Championship Barnes says he will pack his bags and head back to Japan where he intends to contest a minimum of 22 tournaments this season.

His goal for the year ahead?

“I really think the top 50 in the world is realistic if I keep playing the way I’m playing.”

Sanctioned by the PGA Tour of Australasia, the 81st Queensland PGA Championship will be played at City Golf Club, Toowoomba from 23rd to 26th February, 2012.