(Ponte Vedre, FL:) Fears of contracting the deadly Coronavirus is now affecting how the world’s best golfers interact with their fans while meetings will take place this week at the Players Championship that could seriously affect the hosting of one of the four up-coming golfing Majors.

Ireland’s own Graeme McDowell along with American golfing heartthrobs Rickie Fowler and Bryson DeChambeau have each revealed the measures their taking to avoid unnecessary physical contact. 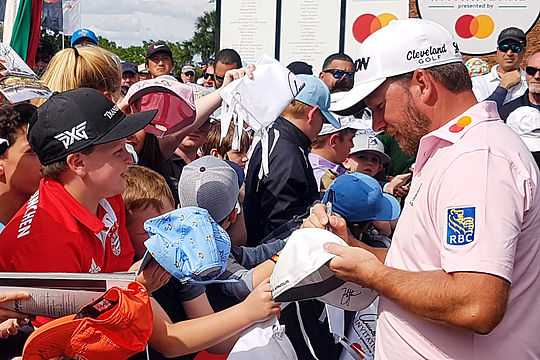 And that was no more evident than last week when all three contested the Arnold Palmer Invitational.

“This Coronavirus is now very much on everyone’s mind and it is going to affect our job in the next six months in some way shape or form you would imagine,” said McDowell.

“I still do a little bit of high-fiving but I gave it a lot more thought last week at Bay Hill as I didn’t have a Sharpie (felt pen) last week in my pocket and I had to borrow other people’s Sharpie’s and pens to sign my autograph.”

“I just hope it doesn’t affect things too heavily.”

The recently married Fowler has a huge ‘younger’ fan base and he admits he is now conscious also of cutting down of ‘high fives’ and other body contact means.

“During my first few years out on the Tour I did do a lot of high-fives, fist pumps and things but then I found myself getting sick every once and a while,” said Fowler.

“So, you will now rarely see me doing high-fives as all you are doing is kind of setting yourself up for contacting something and it’s something I have been more aware of.”

“It’s not that we are trying to stay away from fans but it’s everyone in general but then it won’t stop me signing autographs for the young kids but I will be careful in handling what I am asked to sign and always I will be washing my hands thoroughly afterwards.”

“It’s the same now when eating anything out on the course and other things like picking-up water bottles as everyone is now more conscious of picking-up something.”

And like McDowell and Fowler, DeChambeau has also changed the ways he interacts with fellow players and fans.

“I try now not to fist-pump as much as possible and it’s now ‘elbows’ (smiling) while I have my own Sharpie and I will not use anyone’s pen,” he said.

“I’ve also got hand sanitisers in my golf bag and in my locker room, so I am very conscious of how serious this Coronavirus threat can be.”

There have already been 10 events on three different golf tour’s cancelled or postponed due to fears of the Coronavirus – the last six events on the MENA (Middle East North Africa) Tour, three events in succession in Cairo on the ALPS Tour and one, the Magic Kenya Open, on the European Tour.

Meetings will take place this week at the Players Championship where it is heavily rumoured the May 14th commencing PGA Championship at TPC Harding Park could be cancelled.

There has been talk, if the rumours are correct, of moving the PGA Championship to TPC Sawgrass, the host to this week’s Players Championship.

“It will nearly be not fair on guys if they are not getting their employment opportunities.”

“I am not sure what is going to happen but I do know there is a lot of hand sanitisers in our house and a lot of types of new handshakes like ‘elbow’ handshaking that was taking place at Bay Hill.”

And if the tournaments are to go ahead that could very well take place without spectators.

“So, there is going to be some weird stuff happening in the next six months or so.”