St Michaels and Long Reef will battle for the Division 1 Sydney Metropolitan Pennant title in a fortnight at Stonecutters Ridge.

Following the six round qualification series this year’s first semi-finals had St Michael’s, the defending champions, against Moore Park in a repeat of the 2012 final, whilst Bonnie Doon faced a determined Long Reef.

St Michael’s was the first to secure a finals berth with a strong 5&2 victory over Moore Park.

Daniel Kolar playing number seven for St Michaels retained his undefeated record with a 7&6 win over Josh Collins. Jake Baker at number six for St Michael’s pushed the defending champions to a two up lead early after accounting for John Betland, 3&2.

Steve Slappendel at number five gave Moore Park some hope with a solid 1-up victory over Travis Smyth to finish his 2013 Major Pennant campaign undefeated.

But when Shaun Cameron, playing number four for St Michaels, secured a half against Toby Williams, St Michael’s had gained the momentum with their top-order in Tim Hyland, Zac Mullins and Ben Clementson narrowly keeping in front of their opponents.

To their credit, Moore Park, pushed St Michael’s three top-order players to the wire, with all the matches progressing down the 17th. 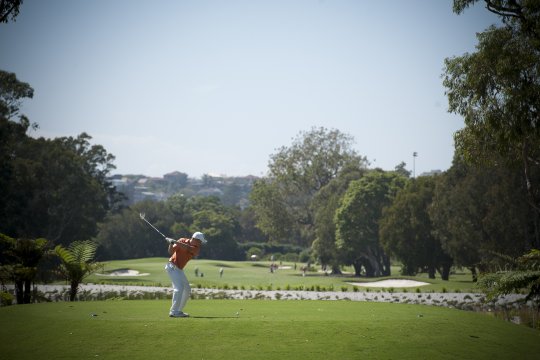 Tim Hyland would narrowly account for Darren Shepherd, 2&1 in the number three match, with Zac Mullins winning 2&1 over Clancy Bowe to secure the needed four matches and a place in the finals for St Michael’s.

The top-order match between Ben Clementson and Matt Gleeson was halved.

In contrast the Bonnie Doon and Long Reef match went down the wire with Dylan Perry playing number three pipping Ruben Sondjaja on the 22nd to give Long Reef its first finals appearance in Division 1 in 91 years – although it won a Division 2 flag in the 1950′s.

Brett Drewitt has been a standout performer for Long Reef playing number one and again secured a 5&3 win over Andy Chu.

Bonnie Doon’s Jordan Zunic was another to feature strongly and won 1-up against Nathan Walters playing number two, to draw the contest with Long Reef.

Earlier, Kurt Barnes at number seven had given Bonnie Doon some hope winning 6&5 over Steve Prior, but Long Reef’s Matt Saad keep his team in the mix with a 2&1 win over Richard Payne.

Seasoned pennant stalwart Greg Bell, playing number five for Bonnie Doon wound back the clock with an impressive 6&4 win over Hamish Campbell, yet Will Barnet at number four for Long Reef secured an all important 1-up victory over Michael Williams.

This lead the teams in the balance with Sondjaja and Perry battling extra holes to determine the finalist.

It was a classic match, which neither side deserved to lose.

Regulation pars on the opening extra three holes kept the contest alive until Sonjaja over cooked his tee shot on the par-3 22nd hole, missing the green and leaving a delicate up-and-down after Perry had safely hit the green.

It would prove the turning point as Perry edged his putt to conceding distance leaving Sonjaja with a testing 6-footer, which slipped by giving Long Reef a place in the final.

In other divisions, Antill Park will meet Monash in Division 2, Bayview is against Winsor for the Division 3 flag, with Wallacia meeting Richmond in Division 4.