What the world’s best golfers have been striving to do for 870 days it took a mini tornado along with hail and drenching rain to halt Tiger Woods drive to regain the world number one title at the Arnold Palmer Invitational in Orlando.

Players were rushed from the course just after 2pm local time and with the conditions so dramatic those in the Media Centre were advised to leave the structure and head for the safety of the clubhouse.

Officials then announced just after 4pm local time that play will resume at 10am Monday morning local time.

Woods had just holed an 11-foot putt for birdie at the second hole to move three clear of his rivals at 12-under when play was halted just after 2pm local time.

Central Florida was then lashed by driving rain and hail and with the Weather Channel labelling the storm a mini tornado that uprooted trees, tossed over TV structures, left a large amount of debris strewn about a flooded Bay Hill course.

Two hours later officials them deemed any further play unsafe and declaring a 10am Monday morning restart to the $6.2m event.

“We didn’t get in much play only two holes, and hopefully the course will be drained, and we can get after it tomorrow,” said Woods.

“At least we got a little activity in today, so we’re not completely stagnant. We’ve dealt with this before. We had that fog delay in San Diego, and this is part of playing outside. We’ve got to deal with conditions like this.” 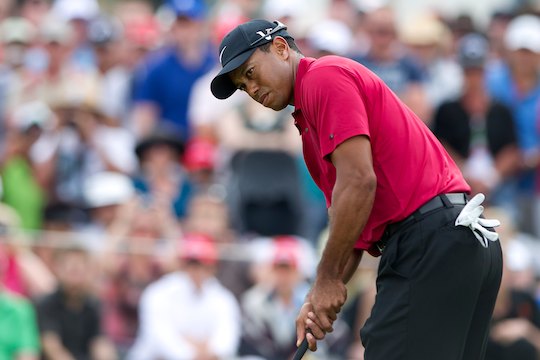 Scotland’s Martin Laird had just pared the 13th to be at one over par when play was halted.

Laird started his day at one under par but had slipped to one over with bogeys at the fourth, sixth and ninth holed before his only birdie when he holed he two-putted from 60 feet at the par five 12th.

Among those managing to complete their round was former Scottish, Welsh and US Open champ, Graeme McDowell and breaking par for a first time this week with a score of 69 for a two over par tally.

And despite a disappointing week, McDowell is pleased with his game ahead of his next event, the April 11th commencing Masters

“The great thing after this week that the most important parts of my game, my bunker play, my short game and my putting going into Augusta are the strengths of my game,” said McDowell.

“So that is very pleasing and those are the parts of my in playing the Masters that I have found weaknesses and I wanted to address those, and those are in great shape and those aspects probably have never been as good as they are right now.”

“The ball striking and the long game comes and goes but while I was a little off the boil this week, I have been hitting great the last three to four weeks.”