Golf needs all the colour and personalities it can get as it battles other sports for TV time and recognition.

Sure, they are playing for millions and are extremely well-paid,,,but just occasionally you get a golfer like baby-faced Zac Blair come along who adds more than money can buy to the tour. 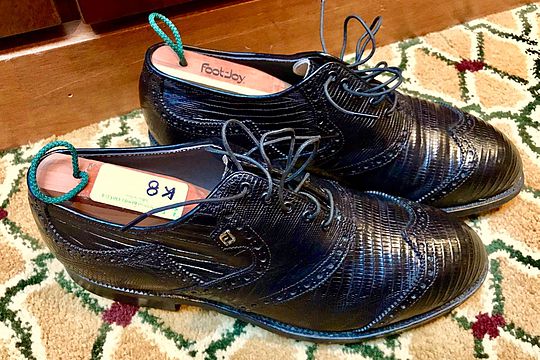 Just last week he made the cut at Jack Nicklaus’ Memorial tournament at Muirfield Village but all he wanted to talk about was the pair of golf shoes that he had bought on eBay on the eve of the event.

“Huge shout-out and two thumbs up to the random guy on eBay that sold me these FootJoy shoes,” Blair declared on Twitter. “[They’re] in the running for the best purchase in history.”

The fun didn’t stop there either: Blair was “called out” by none other than Jack Nicklaus during a hot-tub session in the locker room earlier in the week.

Nicklaus must have been joking when he asked Blair if his parents were around.

Blair got square later in the week when he Tweeted: “Hi Mr Nicklaus, I was the kid in the hot tub earlier this week.”

If you haven’t seen Blair in action, he is a character. At the Tournament Players Championship a few weeks ago he and both his playing partners hit their balls into the water in the second round at the famous island green 17th hole.

The two partners went to the ‘drop zone’ while Blair insisted on playing another ball from the 17th tee and he hit that ball into the water as well.

Then he headed for the drop zone…to hit his fifth shot!