The New South Welshman was the first to admit he has taken his fair share of punishment from the Moonah Links layout and thought it may get the better of him again early in his round. 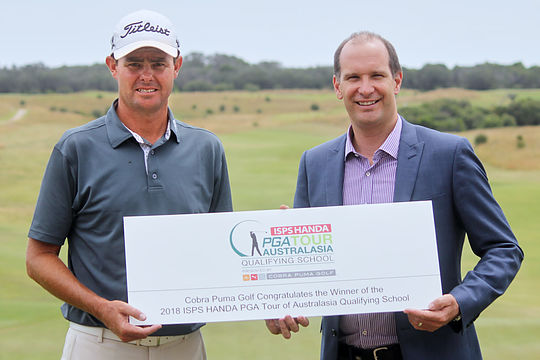 “I thought it was going to get me back today actually after I beat it up yesterday,” said Townsend.

“It wasn’t a good start, I was really battling early, luckily I made a couple of putts, my putter really saved me today.”

Townsend and Mullaney were running a two horse race with a sizeable gap on the field and it was Mullaney who took the lead by one as the pair made the turn.

The running battle was a distraction to Townsend but his experience came to the fore and he was able to re-gain the lead on the penultimate hole, finishing his round with a 3-under 69 and 16-under the card.

“Because we had such a gap on the field it was sort of a distraction and that probably took too much of my focus.”

“But Jordan played great, he pushed me all the way and I think he lead for most of the day, I was surprised I got in front of him because he never looked like hitting a bad shot.”

“I hit a nice birdie on the 17th to get me in front and just held him off.”

Townsend takes home a cheque for $5,000 for his win but the real reward is knowing he has a guaranteed start in every tournament of the 2018 ISPS HANDA PGA Tour of Australasia season.

After a tough 2017, Townsend said winning Qualifying School gives him the peace of mind of a secure spot on the Tour and hopes the win is a sign of things to come next year.

“The best thing about finishing in this position is I don’t have to worry about the re-rank, I know I’m just exempt all year, so I can address my season like I have every other season, it won’t change too much for me which is nice.

“Hopefully this is a sign of things turning around and I can forget about last season and move on to 2018.”

Earning a Category 11 exemption and finishing in respective order was Jordan Mullaney (15-under), Harrison Endycott (7-under), Sam Lee (7-under), and Adam Stephens (6-under).