Townsend races to Q-School lead with 65

New South Welshman Aaron Townsend shot the round of the day with a 7-under 65 to race to the lead of the final stage of the ISPS HANDA PGA Tour of Australasia Qualifying School presented by Cobra Puma Golf.

Townsend was bogey free in the third round and shot five birdies and an eagle to be 13-under the card and holds a one shot lead with one round remaining at Moonah Links. 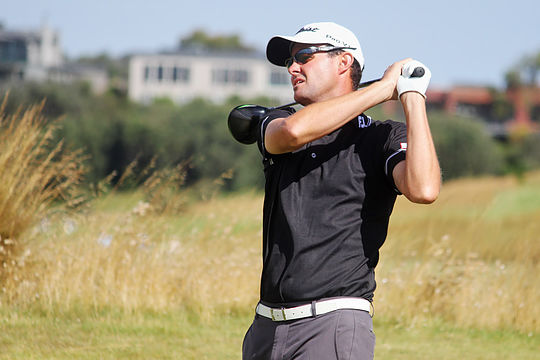 “I played like I have the last two days, I’ve just hit it where I’ve wanted to a lot of the time and I made some nice putts today,” said Townsend.

He said he’s happy with the way he has played the Moonah Links layout, a course that he has struggled with previously.

“I haven’t had much success at this course in the past but I’m just plotting my way around nicely.

“It’s a strong golf course and it always will be, I’ll keep doing the exactly same thing I’ve been doing tomorrow, it seems to be working for me.”

Hot on Townsend’s tail is fellow New South Welshman Jordan Mullaney who shot 4-under 68 to be 12-under the card in outright second.

“I played really solid early on and made a few pars, couple of bogeys but I finished off strong which was good,” said Mullaney.

The leading pair has a sizeable gap on the rest of the field; their closest competitors are Nick Flanagan, Sam Lee and Adam Stephens who sit in a tie for third at 6-under the card, seven shots back from Townsend.

Stephens shot 4-under 68 to jump up to third spot, with the top-5 finishers all receiving good playing opportunities in the 2018 ISPS HANDA PGA Tour of Australasia season, he said he too will stick to his game plan heading in to the final round.

“I’ll play like I have the last few days and just keep hitting fairways and greens and not do anything silly,” said Stephens.

“There’ll be some guys who will get a bit excited being the final round and drop shots so it’s just a matter of staying patient with your own game.”

Rick Kulacz also shot 4-under 68 to sit in sixth position at 5-under the card while Harrison Endycott is one shot further back in seventh at 4-under the card.

Ruben Sondjaja and Anthony Marchesani round out the top-10 at 3-under the card.