Until he moved to Melbourne from Echuca to play pennant for the Kingswood Club, Jack Wilson was a permanent fixture at Rich River Golf Club.

The local knowledge was vital when he won in only his second start as a trainee professional over the Moama layout to pocket a cheque for $5,400 in February’s Coca-Cola Rich River Classic. 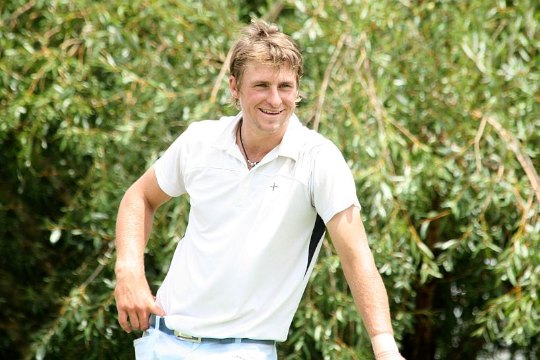 “You’ve got to treat every hole there as a potential birdie hole. I managed to be solid over the four days without being too spectacular.”

Wilson is well-known in amateur ranks. He won the Victorian title 4 & 3 against Tasmania’s Ryan McCarthy at Woodlands last year.

He was also a member of Victoria’s winning Colts team at the national Interstate Series in 2010.

“I have worked in the bar and pro shop at Kingswood for 18 months and when the opportunity came along to become a trainee with David Capaldo, who is also my coach, I took it.”

Wilson handled the hot and stormy conditions at the Rich River Golf Club better than most.

At various times in the final round, Wilson and his fellow trainees were drenched by heavy downpours that threatened to delay play.

Wilson utilised his local knowledge as a former Rich River junior member to birdie three of the last four holes to run away with the victory.

He said he was methodical in his final round, playing the first fourteen holes at even par, before his birdie blitz gave him a runaway four-stroke win after returning a three-under 69.

For Stone, as a third year trainee playing in his final Rich River classic, it was his second frustrating year in succession to finish runner-up.

Wilson’s victory came in his maiden four-round professional event. He was second at his only other pro start a couple of weeks earlier over 18 holes at Mornington.

“My aim is to eventually play overseas on one of the better tours if possible. But I won’t be trying to do that until I have completed my traineeship. There are so many good players out there from all over the world,” he said.

“I think you definitely need something to fall back on and a traineeship gives you that in case things don’t go according to plan.”