Australia’s Cameron Davis will meet New Zealand’s Tyler Hodge in the final of the Men’s Australian Amateur Championship to be played over 36 holes at The Australian Golf Club in Sydney.

Shelly Shin beat Becky Kay, 3&2, to earn herself a place in the championship match and will meet Lizzie Elmassian after the Australian Golf Club member accounted for Victoria’s Jo Charlton, 3&2 in their semi-final match. 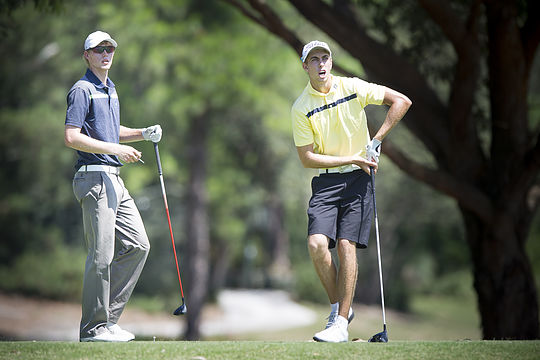 Justin Warren (R) from The Australian Golf Club and Cameron Davis from Monash do battle in their Semi-final match (Photo: Anthony Powter)

Davis rallied from three holes down early in his round to eventually beat local member Justin Warren in 19 holes. It was a classic match which either player could have advanced to the final. Both played stellar golf as they traded holes.

Yet it was Davis, ranked 120th in the world, who held his nerve to clinch the victory.

“It was a great match and I’m still coming to terms with the victory,” said Davis, who recently won the Victorian Amateur title.

“I just stuck to my game plan and kept focusing on each hole at a time and it worked. I’m thrilled to be in tomorrow’s final after such a tough week of golf.”

In the morning session Davis disposed of Jake Sullivan, 3&2, to set up his semi-final match with Warren, after Warren had accounted for Brayden Peterson on the 19th.

Hodge is no stranger to big amateur matches, with the Kiwi winning the 2012 Australian and New Zealand Amateur titles. He’ll be a real challenge for Davis in tomorrow’s final.

“It’s great to be into another final,” said Hodge, ranked 371st in the world.

“I’ve played well all week and being able to get some good results. We’ll see tomorrow, but I like the layout and are hitting it great.”

Hodge certainly was impressive against Kevin Yuan, another member of The Australian, and dominated their semi-final match to win 3&2 after Hodge accounted for fellow Kiwi, Jason Gulasekharam, 2&1.

Yuan had earlier in his quarter-final disposed of Corey Conners, 2&1.