Playing in the first group of the day, Nisbet got off to a steady start and had a front row seat for the shot of the week so far. 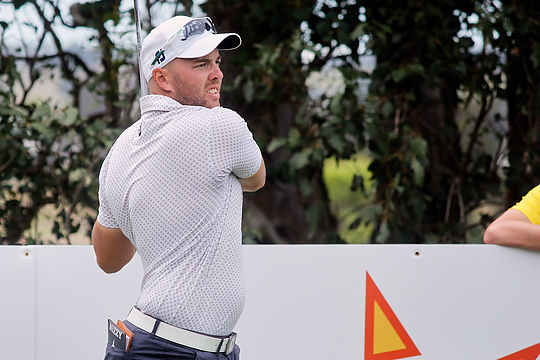 “We got out first group and had a hole-in-one out there so everyone got off to a good start,” Nisbet said, referring to his playing partner amateur Thomas Heaton who aced the 126 metre 2nd hole.

The 15-year-old amateur made a splash in his ISPS HANDA PGA Tour of Australasia tournament debut after Monday qualifying with his perfectly placed hole-in-one on the 126 metre par-3 2nd.

“I had 126 metres to the hole and I thought I’d just hit a smooth 9iron in there, it was the perfect line, about a two metre draw, one hop and a little bit of spin then straight in,” Heaton said of his aced shot.

“It was great to see it go in, my first Professional tournament and only on the second hole, I was really happy.”

Nisbet got his round going with a birdie on the 3rd and remained blemish free for the opening round.

“The first time I saw the course was Tuesday but I’ve been really impressed, the greens are great and they’re really receptive at the moment,” Nisbet added.

Scrivener matched Nisbet’s round with his own bogey free 64, making his first appearance on Australian soil since February’s ISPS HANDA World Super 6 Perth where he finished fourth.

The European Tour regular said he is enjoying the comforts of home and is seeing the results in his game with a terrific round today.

“It’s the first time I’ve played in Australia in a tournament in a long time so it was relaxing and a bit of fun and I played nicely,” Scrivener said.

“The whole week has been a little bit different to what I usually go through but in a good way. It’s nice to be able to have a few weeks home to relax; everything feels a lot more comfortable at home.”

Coletta, battling a run of illness that forced him out of his Isuzu Queensland Open title defence, made a fantastic return to tournament golf with his round of 8-under 64. He admittedly took a step back from the game in 2017.

“I had a great time out there, I played here back in 2013 and the course is really good, the greens are fantastic out there,” Coletta said.

“I’m happy to be out here, really happy. I had a massive 18 months leading up to turning Pro, having a little bit of hype as well took a massive mental toll on me.

“And I actually had a really good time out there.”

Hot on the heels of the trio is talented amateur Min Woo Lee who birdied his final hole to finish 7-under 65, just one shot off the lead.

“It was good, I hit it really solid and it was probably one of my best ball striking rounds this whole year,” Lee said.

“Everything was going really well, I had a bit of a hiccup in the middle but really happy with my round, hopefully the next few rounds go like that.”