Andrew Tschudin has claimed his first Australian title at the Queensland PGA Championship in Toowoomba – a victory that was 14 years in the making.

With the tournament reduced to 54 holes following heavy rain, Tschudin fired rounds of 67-68-64 to finish at 11-under-par, a stroke ahead of second round leader, Andrew Martin and Brody Ninyette. 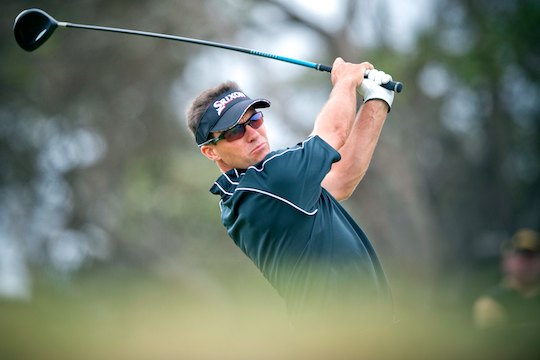 Ninyette was playing in only his fourth professional event after an impressive amateur career, which included winning the 2010 Western Australian Amateur.

A costly double bogey on the 18th dashing Ninyette’s chances of claiming his maiden professional title.

Blizard, the 2007 Australian Amateur champion, stormed home with a sizzling 7-under-par 63 to move into the pack.

Tschudin, 39, grew up in Adelaide before moving to Victoria as a teenager to play the famed sand belt courses and to strengthen his game. In 1998 he joined the Australian Tour, taking medallist honours at the 2008 Q-School.

In 2004, Tschudin played the American feeder tours, leading the money list that year on the Hooters Tour where he secured a win in the Michelob Ultra Classic.

Despite previous pro-am wins, it was Tschudin’s first professional title. The following year he defended his title at the Michelob Ultra Classic for his second win on the Hooters Tour.

At the time, Tschudin was the first foreign player to win a Hooters Tour Event since fellow Australian Jamie Rogers in 2002.

For the next four years, Tschudin remained on the Hooters Tour winning his third title there in 2008 at the Orion Group Classic before returning to Australia to play locally.

In 2008 Tschudin won the SBS Lake Hills Open on the Korean Tour for the biggest pay cheque of his career to date.

Recently Tschudin has focused on the Australian and Asian tours where he has had mixed success. His victory on the weekend will prove invaluable in the pursuit of another title in Asia.

“It is also about proving to myself that I could get the job done down the stretch and therefore if I get in a similar position in a OneAsia event, I can be confident that I can produce the same result.”

Tschudin heads back to Asia with an early victory to his credit and newfound optimism about his chances of claiming another title.