It seems Turkey – and its history of safety ‘issues’, has to continually prove to the European Tour that it can host some of the best golfers in the world – in relative safety.

This year’s event, the Turkish Airlines Open to be played at the Regnum Carya Golf and Spa Resort in Antalya, Turkey from this Thursday has been no exception. 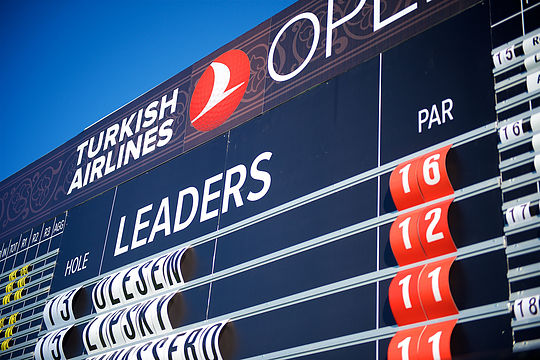 With increased security concerns last year, Andrew Chandler, whose sports marketing firm, ISM, helps run the event, and the Turkish Golf Federation president, Ahmet Agaoglu, had to remind European Tour officials that the event was being played in the tourism capital of Turkey.

Not only that – the venue was actually in a secluded golfers’ haven and in a region that was renowned for its white sandy beaches on the shores of the Mediterranean.

Last year, after meeting with the British ambassador to Turkey, Richard Moore and Turkey’s Minister for Foreign Affairs Mevlüt Çavusoglu, Pelley left convinced it was safe.

And just to completely alleviate any worries, the tournament organisers arranged a charter flight for players from Gatwick Airport in London to Antalya.

And a plane carrying competitors from the HSBC Champions event in Shanghai stayed on the runway at Istanbul’s Ataturk Airport — just months earlier the site of a terrorist attack that killed dozens of people — before flying to a private terminal in Antalya.

Once the players landed, they were taken by private transportation to the resort, the same site that hosted the G20 summit in 2015.

None of those measures prevented the Ryder Cup players Rory McIlroy, Matthew Fitzpatrick and Patrick Reed from pulling out.

And the tournament went off without a hitch.

This week Turkish Open organisers are confident that the all-inclusive resort’s safety measures and precautions will again ensure another incident-free tournament.