Kevin Tway made a 6 metre birdie putt on the third hole of a playoff on Sunday to win the season-opening Safeway Open at Silverado for his first PGA Tour title.

Tway beat Ryan Moore on the par-4 10th after Brandt Snedeker dropped out on their first extra trip down the par-5 18th. Tway earned his win, ending the day with five consecutive birdies, two in regulation to join Snedeker and Moore at 14-under-par to make a sudden-death playoff, then three more in the playoff to win.

Tway (Titleist Pro V1x), 30, now joins his famous father, Bob, as a PGA Tour winner following a period of struggles as a professional securing his inaugural win in his 91st start on Tour.

“It was nice to get hot at the end,” Tway said. “I wasn’t really in it on the front nine. Brandt made a couple bogeys starting the back. I was kind of right there, but kind of hanging around. Birdied 17, 18 to get into the playoff and then kept it going in the playoff — and here I am.” 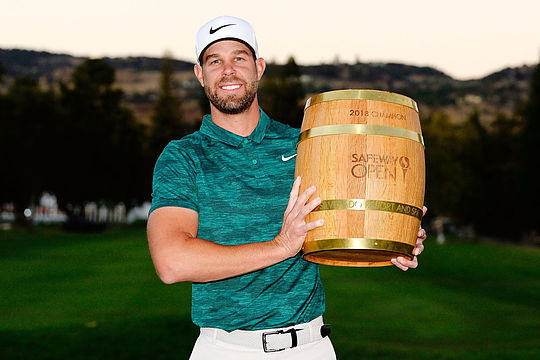 Snedeker was eliminated on the first sudden-death hole, when he missed a 9-foot birdie putt. Tway and Moore matched birdies on the first and second playoff holes before Tway’s decisive putt on the third.

Moore shot a final-round 67, including birdies on two of the last three holes, to join the playoff. Tway, playing alongside Snedeker in the final group, made birdie on the last two holes to post 71 and also reach 14-under-par.

Snedeker led by five early in Sunday’s round, and still led by four as he made the turn, but he stumbled with three bogeys on 10, 11 and 12. Moore finally pulled even by making birdie on No. 18. Meanwhile Tway kept his composure in challenging conditions as the wind picked up over the closing stages of the tournament.

Snedeker could have won in regulation, but he made bogey on No. 17 and settled for par on the 18th (a par-5), the third-easiest hole all week. Snedeker shot 74 on Sunday, including 39 on the back nine.

The victory sees Tway with a start at the the Masters and the Sentry Tournament of Champions at Kapalua. Tway revealed plenty of emotion following the win as to his journey so far.

“It’s been a long road but this is why you work hard,” said Tway. “Finally got here and it feels amazing.”

Aussie Aaron Baddeley produced his best PGA Tour finish since his win at the 2016 Barbasol Championship, narrowly missing the playoff by a shot to finish in a share of 4th at 13-under-par.

Rookie Cameron Davis finished in a share of 17th position with a 8-under-par total in his first event as a PGA Tour member in what was the perfect start for the Australian Amateur and Open winner.

Brett Drewitt finished in a share of 25th position at 7-under-par with John Senden making the weekend but missing the final day’s play.