Ranked 665th in the world, young Aussie pro Justin Warren has become an overnight viral sensation but not for the right reasons.

A video of his misfortune has garnered over 300,000 views on the PGA Tour’s Twitter feed. So what happened exactly? 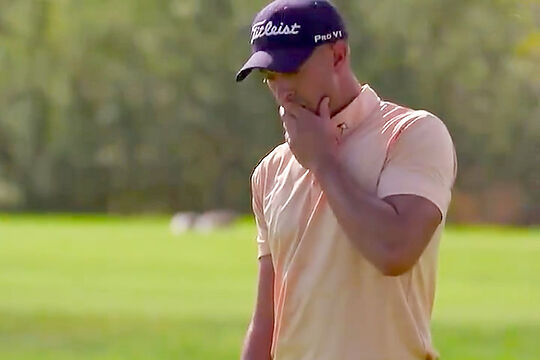 Well, the New South Welshman originally missed a four-foot putt on his final hole during regulation play to card a 7-under 65. A putt that would have earned him a spot in the field for this week’s Barracuda Championship and his first PGA Tour event.

Instead Warren was forced into a playoff with fellow pro Mark Baldwin and that’s where things went even further downhill.

During the playoff, the Sydney-sider then faced a simple one-foot putt to secure the last of four spots into the $3,500,000 modified stableford tournament.

24-year-old Justin Warren misses a short putt in a sudden-death playoff at the @CudaChamp Monday Qualifier.

The chase for his first PGA TOUR start continues. pic.twitter.com/qJ89zr9CAH

It was a putt that on any other day would have been a “gimme” so it is perhaps understandable that the Sydney-sider quickly walked up and made his stroke.

Amazingly the ball caught the edge of the hole and finished about six inches behind the hole, ending his chance at glory…at least for this week.

Warren stood paralysed for what seemed like 10 seconds as the enormity of the miss sunk in.

“It sucks, and it makes me want to punch a wall, but that doesn’t help anyone. I just have to recognise that I made an error that cost me dearly, and it’s a tough one to swallow, but I just have to keep on keeping on,” Warren told PGATour.com.

“As brutal as it was to finish the way it did, it’s golf.”

Warren has enjoyed several impressive results over the past year in Australia including a runner-up finish at the Moonah Links PGA Classic and a share of 5th place at the Victorian PGA Championship along with an outright 5th effort at the NT PGA Championship.

Ironically, Warren wasn’t even supposed to be playing in the US. Current COVID restrictions in Australia have meant that he couldn’t get home to quarantine in Sydney ahead of playing in the NT PGA Championship, which tees off on August 19.

So in the meantime, the 24-year-old is trying to make the best of the situation by entering Monday qualifiers.

“I’ve had a few decent results, so I have a little money in the bank to pay for it [qualifiers]. And some members from my home club (The Australian Golf Club) have helped out.”

Like viral sensation Michael Visacki at the Valspar Championship, the unexpected publicity might just lead to some important opportunities for the young pro…stranger things have happened.