Two Aussies in Final Eight at US Junior Amateur

Australia’s Fred Lee, 16, posted a 2&1 victory over top seed and stroke-play medalist Travis Vick, 16, of Houston, Texas, Thursday to advance to the Quarterfinals of the 2016 U.S. Junior Amateur Championship at The Honors Course.

Lee, who is competing in his first USGA championship and won this year’s Western Australia Championship, sank a 4-foot par putt on the par-5 17th to clinch the third-round victory on the par-72, 7,326-yard Pete Dye layout. In the morning’s Round of 32, he defeated Wocheng Ye, 15, of the People’s Republic of China, 3 and 2. 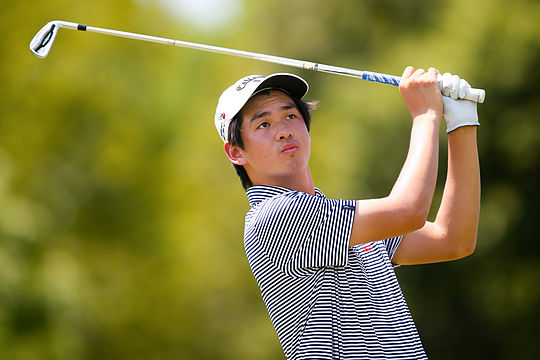 Fred Lee in the third round of match play during the 2016 US Junior Amateur at The Honors Course in Ooltewah, TN (Credit: USGA/Darren Carroll)

“It definitely proves that my game is solid,” said Lee, whose caddie this week is the son of the club professional. “It showed out there today. I didn’t miss many greens and I hit quite a few fairways.”

Lee, who also claimed last year’s Australian Boys’ Amateur, made a handy up-and-down for a winning par on No. 13 to take a 2-up lead. His approach missed the green to the right and he pitched from the rough to within 8 feet for what proved to be a deciding moment in the match.

The U.S. Junior Amateur continues with the Quarterfinals and Semifinals on Friday. The championship concludes with a 36-hole final on Saturday, starting at 8 a.m. EDT.

In his second-round match, Lee, the No. 3 seed, captured eight holes with three birdies and five pars for a 7-up margin at the turn and went on to defeat Chase Furey, 17, of Los Angeles, Calif., 6 and 5.

Eugene Hong, the No. 2 seed, rallied in his second-round match to defeat Davis Shore, 17, of Knoxville, Tenn., in 23 holes. He had an easier win in the next round when he dominated Austin Coggin, 15, of Vestavia Hills, Ala., 5 and 4.

Hong recovered from a poor tee shot on the fifth extra hole by lining a 5-iron from the right rough to the front of the green. After Shore’s wayward approach led to a bogey, Hong made a 5½-foot par putt to win the longest match of the championship.

“After you beat someone that good, you gain a lot of confidence in your game,” said Hong, who was a U.S. Junior Amateur semifinalist last year. “I had to hit a lot of quality shots and make a lot of putts.”

Hong’s soaring confidence carried over into the Coggin match as he made three consecutive birdies from holes 2-4. He hit a wedge to within 13 feet to set up a birdie on the par-5 second, added a conceded 10-footer on the following hole and sank a 30-footer on No. 4.

Won Jun Lee, 17, of the Republic of Korea, also reached the quarterfinals. He registered a 4&3 triumph against Sam Jean, 16, of Greenwood, Ind., in the second round and followed with a 1-up decision against Cole Hammer, 16, of Houston, Texas.

Lee, the No. 4 seed, separated from Hammer by winning three consecutive holes on the outward nine. He drilled a 260-yard 3-wood onto the green on the par-5 11th to set up a two-putt birdie and then spun a 56-degree wedge to within 13 feet on the next hole for another birdie.

“I have played with some pros, and he was better,” said Hammer, who qualified for last year’s U.S. Open and also played in the 2015 U.S. Amateur. “They (pros) mishit shots sometimes and he literally missed one shot.”

Earlier in the day, Hammer pushed out to a 6-up lead with an eagle and birdie on consecutive holes en route to a 6&4 decision against Joey Moore, 16, of Billings, Mont. Hammer holed a 42-yard 58-degree wedge for an eagle on the par-5 11th and followed with a 14-foot birdie putt on No. 12.

Noah Goodwin, 16, of Corinth, Texas; Wei Wei Gao, 16, of the Philippines; and Brandon Gillis, 17, of Nashua, N.H.; each advanced to the Quarterfinals. Goodwin, who made it to the Round of 16 in last year’s U.S. Junior Amateur and reached match play in the U.S. Amateur, defeated Nicholas Lyerly, 16, of Salisbury, N.C., by totaling seven birdies in a 3&2 victory.

Lyerly had advanced to the third round by upending Joaquin Niemann, 17, of Chile, who is No. 9 in the World Amateur Golf Ranking™, 4 and 3. Lyerly, who became the youngest player to win his state amateur this year, won three of the opening four holes with birdies to take control.

Before his loss in the third round, Vick defeated Teddy Zinsner, 17, of Alexandria, Va., 6 and 5, in the morning. He won six consecutive holes on the outward nine and jump-started that run by hitting an 8-iron to within 3 feet on the par-3 third. He capped the explosion by converting a 40-foot chip from just off the green on No. 8 for a 7-up cushion.

The U.S. Junior Amateur is one of 13 national championships conducted annually by the United States Golf Association, 10 of which are strictly for amateurs.