Two-time runner-up Els is done with the Masters

And despite the fact the now 49-year-old Els has twice finished runner-up in the US Masters, he has declared he has had enough of the punishment dished out by one of the world’s most famous golf courses, Augusta. 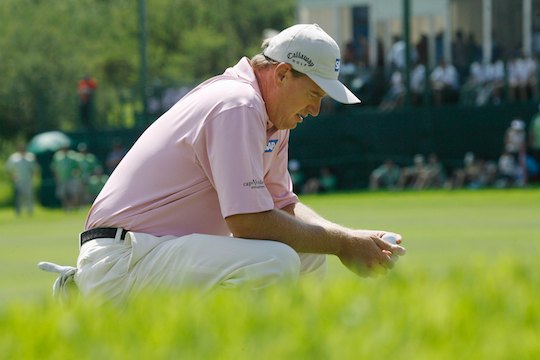 “How many times do you want to run into a wall,” Els told a US newspaper.

“That’s how I have felt my last couple of years there. I didn’t want to say it before, and I don’t have any bad feelings about it.”

To his credit, the two-time US Open champion and twice British Open winner has kept coming back for more punishment, despite that stunning seven-putt there in 2016.

Yet still the course wouldn’t relent.

In 2017 Els finished the Masters 20-over-par and now admits he’s always had a love-hate relationship with the place.

“When a thing stings you, it keeps stinging you,” said Els.

“When it gives to you it keeps on giving.

“I’ve seen that with Gary Player; I’ve seen it with Jack (Nicklaus). It was always almost like a curse to me.”

Yet Els has gone so close to donning a Green Jacket – which would get him invited back to play every year for as long as he wanted to.

His closest call came in 2004 when American Phil Mickelson holed an amazing birdie putt on the final hole to deny Els his shot at victory.

“You start disliking the place when you shouldn’t,” he said.

“I try to keep my honour for the golf course and the people, because the members are great and the course is actually great.”

“But it just doesn’t want to give me anything and then I was finally like, ‘You know what? That’s fine. Let’s move on.”